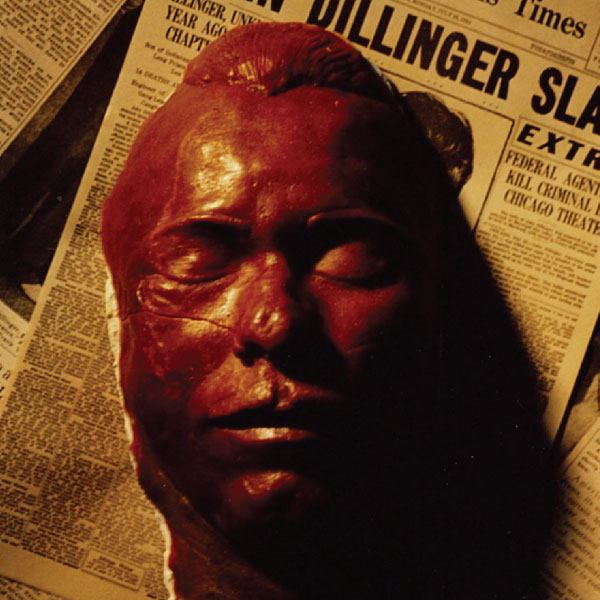 McCrone Associates examined a plaster cast containing a rubber mask that was purported to be cast from John Dillinger’s face at the time of his death.

John Herbert Dillinger was an infamous American gangster and robber during the Depression era. Dillinger, the first criminal to be named Public Enemy Number One by the FBI, was shot by federal agents in the alley behind Chicago’s Biograph theater on July 22, 1934. Dillinger died instantly from a shot that entered the base of his neck, severed his spinal chord, and exited below his right eye. Police were called to the scene to remove his body; he was pronounced dead at Alexian Brothers Hospital and transported to the Cook County Morgue.

In the 1930s, it was common to create a moulage—an impression or cast—for use as evidence in a criminal investigation. While Dillinger’s body lay at the morgue, death masks were produced; however, accounts differ on the number of masks that were cast. Chicago Police Officer Alfred Mulvaney confiscated a mask cast by Professor D.E. Ashworth of Worsham College of Embalming, pictured in the Chicago Herald and Examiner.

Two masks were cast by Harold N. May of the Reliance Dental Manufacturing Company; one was sent to the FBI, and the other was retained by May.

McCrone Associates was asked to examine a death mask believed to be pictured on the front page of the July 24, 1933 Chicago Herald and Examiner—the mask that was confiscated.

The plaster cast was examined by two McCrone Associates scientists. The interior of the cast was covered with black rubber that adhered to the plaster surface and was later removed for analysis.

The materials of construction, plaster and carbon black filled rubber, were available at the time the mask was purported to have been made.

Upon visual inspection, it was apparent that the object was not the mask pictured in the newspaper photo. Aside from distinct differences in the mask’s appearance, the interior of the mask in the newspaper photo showed no apparent traces of black rubber. Facial features were poorly recorded in the plaster, implying that the plaster was not in contact with a person’s face.

The rubber mask showed many more features than the plaster. However, if the rubber had been in contact with Dillinger’s face, it would be reasonable to expect to find hairs (scalp, facial, e.g., eyebrow) and skin cells embedded in the rubber surface, and none were found.

Microscopical examination of the rubber mask revealed small white flakes throughout its entire interior. These soft, low-melting flakes were further analyzed using infrared spectroscopy. Their infrared spectrum indicates that they are particles of crystalline hydrocarbon wax, which has two implications: either wax was poured into the mold to create copies, or it is residue from a mold used to create the rubber mask. In the early 1930s, this type of wax was not typically used in the true art of moulage; exotic vegetable waxes would have been used.

It was concluded that the mask was not a representative example of the moulage technique for reproducing fine detail at the time the mask was said to have been created. Scientists also determined that the black rubber, while available during the early 1930s, was not used for direct replication of facial features.