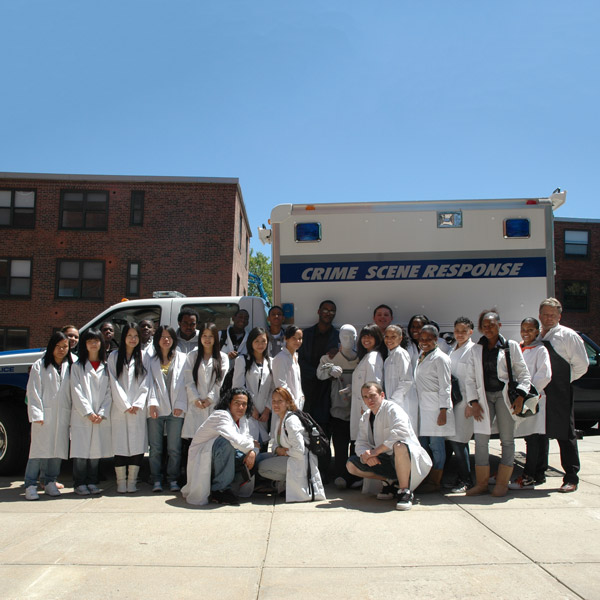 In 1996, with the help of The McCrone Group, Fox helped transform the struggling law program at The Advanced Technology Academy in Las Vegas by developing one of the nation’s first high school forensic science labs. Targeting students not traditionally drawn to science, the program ignited their interest by casting them as crime scene investigators – long before CBS ever launched the popular CSI series in Las Vegas.

There was just one minor obstacle: Fox didn’t know the first thing about forensic science. Nor was there precedent for such a program. Undeterred, Fox set out into uncharted territory determined to seek the education, support and equipment necessary for developing a forensic science classroom laboratory.

Fox’s first experience with The McCrone Group was in 1996, when he contacted the sales division McCrone Microscopes & Accessories. He was interested in purchasing the McCrone Particle Reference Slide Set because of its variety of samples, including hairs, fibers and other trace evidence-like samples. Although the slide sets were backordered, McCrone worked with Fox to create a personalized slide set to meet the needs of his students.

In June 2008, The McCrone Group’s education division, Hooke College of Applied Sciences, began offering the Microscopy Camp for Middle School and High School Teachers. Fox remembered his experience from years ago and was quickly interested in attending the new workshop.

Fox commented, “It was one of the best workshops that I have ever attended, and you’re talking about a guy that has been doing this stuff for 18 years. I walked away with a brand new digital microscope, a wealth of knowledge and a relationship that I hope lasts for the rest of my career.”

Donald Brooks, President and CEO of The McCrone Group, and Charles Zona, Dean of Hooke College of Applied Sciences, encouraged Fox to return to Westmont to take the Polarized Light Microscopy course in 2009 and the Forensic Hair Comparison Course in 2010. They have also invited Fox to instruct and assist with a summer forensic science workshop for teachers.

The McCrone Group has helped Fox develop some of the microscopy and forensic science curriculum of his program. Despite a tight budget, through donations including some microscopes, parts and repairs provided by McCrone Microscopes & Accessories, Fox’s classroom began to resemble that of a typical college forensic science laboratory.

“Don [Brooks] and others at McCrone believe that education is the best place to give back,” said Fox. “I’m a firm believer in that, and so it’s just the natural connection for us to get along and make some stuff happen. We’re here to do something for the kids.”

Drawing on his many resources, including The McCrone Group, Fox launched the very first high school forensics program in Las Vegas in 1996.

Classes filled up and wait lists grew longer as word quickly spread that Fox’s students were investigating staged crime scenes and examining blood spatter patterns. Hundreds of prospective students struggling in math and science were flocking to Fox’s class looking to calculate the trajectory of a bullet.

“I have children walking through the door not knowing what a test tube is,” Fox said. “This is where the work needs to be done.”

Students who might not have graduated high school were moving on to be the first in their families to attend college. Many are pursuing law and forensic-related careers and have gone on to become lawyers and law enforcement officers.

After nine years of developing the forensics program in Las Vegas, Fox moved to the Boston Public School system to duplicate his success. In 2009, more than 300 kids selected the course on their class preference form, hoping to get one of the 120 coveted spots. Students often endured commutes of more than an hour to attend Fox’s classes.

With two successful forensic science programs launched, Fox is planning to open the most advanced high school forensic science laboratory in the country, with aspirations of training law enforcement professionals. Fox’s efforts have not gone unnoticed in Washington, DC. This year he was selected for a highly competitive fellowship with the Society for Science and Public, which will provide financial support to continue supporting underrepresented individuals in science.

Too often, children who do not have the opportunity to go to college believe that they will not be able to work in a highly skilled industry. Fox’s new lab would act as a “farm club,” teaching forensic science principles, placing students into internships and sending them off ready to work at entry- level forensics positions, which the Bureau of Labor Statistics expect to increase by 20 percent. The program is set to launch in the fall of 2011.

“The exciting thing is that we’re getting kids in here that weren’t interested in science and we’re putting together something unique that nobody else in the country has,” said Fox.

As Fox continues to inspire students, The McCrone Group will continue to help Fox change the way students look at science.