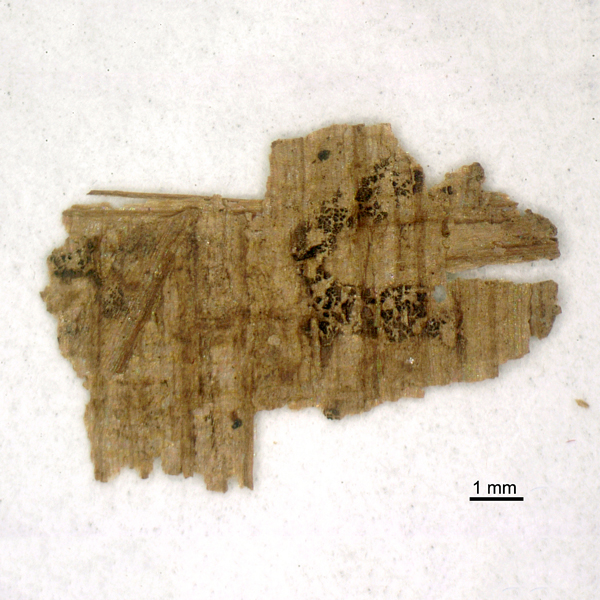 Ink Analysis: The Gospel of Judas

The National Geographic Society consulted with McCrone Associates as part of their international team to help authenticate the 1,700-year-old document and only known surviving copy of the Gospel of Judas. Using microanalytical techniques, scientists at McCrone Associates determined the types and ages of the inks used to create this ancient document. These findings helped to validate the authenticity of the document and identified the ink itself to be of additional significance.

The Gospel of Judas is part of a 66-page codex (a handwritten manuscript in book form) that tells a story different than what is traditionally believed about the relationship between Jesus and Judas (Figure 1). The manuscript is written in Coptic, a form of ancient Egyptian language using mostly Greek letters, dating to the third or fourth century. This would make the Gospel of Judas about 1,700 years old.

The codex was discovered in Egypt in 1978, but its contents were not made public until 2006. At that time, a team of international experts in conservation, authentication, ancient languages and the history of early Christianity were assembled to answer the many questions surrounding the ancient document.

The Gospel of Judas changed hands several times after its discovery; it was moved from Egypt to Europe and then to the United States. Once in the United States, it was kept in a safe deposit box for 16 years on Long Island, New York, until antiquities dealer Frieda Nussberger-Tchacos bought it in April 2000. After unsuccessfully attempting to resell the document, Nussberger-Tchacos became alarmed by the codex’s rapidly deteriorating state, and she transferred it to the Maecenas Foundation for Ancient Art in Basel, Switzerland for safekeeping.

The Maecenas Foundation, in partnership with the National Geographic Society, assembled an international team of experts to conserve, reassemble, translate, and determine the age and authenticity of the document without further damaging it, especially given its delicate state.

McCrone Associates was approached to examine the ink used in the document to help corroborate or disprove the results or conclusions drawn by others from the authenticity team.

No stranger to high profile cases, McCrone Associates had previously analyzed the Shroud of Turin, which many believed was the burial shroud of Jesus, and the Vinland Map, a supposed ancient rendering of the New World. In both cases, the objects were determined to be forgeries.

McCrone Associates scientists examined the Gospel of Judas manuscript for the presence of both positive and negative evidence, e.g., constituents not available during the proposed time period would place the document’s creation at a later date. For McCrone Associates scientists, authentication is viewed as a failure to uncover evidence of more recent creation, and then successfully placing results into historical context. They also rely on the circumstances surrounding the document, i.e., how was it discovered, stored, transported or conserved to help account for presence of materials found in the course of the analysis.

The samples were prepared for analysis within McCrone Associates’ ISO 5 (Class 100) cleanroom to avoid possible contamination. Portions of the collected samples were isolated and mounted on different substrates for ultramicroanalysis. Over 50 preparations, ranging from fragments of papyrus to individual ink particles, were mounted, characterized, and analyzed during the course of the investigation.

Although the manuscript had deteriorated over the years and the two pages sampled were damaged, they still had large blocks of text intact. Within the cleanroom facility McCrone Associates’ scientists used extremely fine-pointed tungsten needles to remove small samples of ink from several locations on the decorative chevrons, or v-shaped decorative symbols, at the page tops. In addition to their initial samplings, McCrone Associates was also provided with two small papyrus fragments with bits of writing on them. The photomicrographs show the ink to be cracked and grainy and very loosely attached to the papyrus substrate in many locations.

Once isolated from the papyrus, the ink samples were examined using polarized light microscopy (PLM) at magnifications between 40X and 1000X. McCrone Associates scientists noticed what appeared to be two different inks, one black and one brown. Although most of the ink material appeared as isotropic, red-brown transparent flakes with concoidal fracture (meaning the material “broke” in a pattern similar to glass shards) there was also a black component to the ink.

McCrone Associates scientists then examined the samples using both scanning electron microscopy (SEM) and transmission electron microscopy (TEM). These analyses not only provided important visual information about the ink material but also provided the constituent elements present in the ink (Figure 2). This helped clarify that the black ink was a carbon or lamp black ink, and the brown ink contained iron, suggesting that it was an iron gall ink, a common form of ink made in the 6th century. Although iron gall inks typically contain approximately equal amounts of iron and sulfur, very little sulfur was present in this sample.

McCrone Associates further tested the ink with infrared spectroscopy (FTIR or micro-FTIR), and extracted various IR spectra. In comparison to McCrone Associates’ library of reference spectra no matches or near matches were found, but the ink spectra were most consistent with gums or other plant resins.

Gum Arabic resin is the material most often cited in early ink-making formulations, and although the IR spectrum of modern gum Arabic was not a perfect match with the ink from the codex, it was similar enough to indicate that the ink formulation used was most likely an earlier formulation of the material.

These characteristics helped McCrone Associates identify one of the inks as iron gall ink which, in turn, raised questions about the documents’ validity. In the third or fourth centuries, the manuscript’s proposed date of creation, Egyptians commonly used carbon-based inks (inks made from mixing carbon particles from smoke or soot with water). Carbon-based inks were later made obsolete by iron gall inks by about the 6th century, much later than it was believed the document was written. –This meant that either the document was more modern than originally believed, or the ink was indeed ancient and unlike any formulation previously identified.

Mr. Barabe then researched ancient ink formulations to put the findings in context. In reviewing a study performed by the Louvre, he found that some official documents from third century Egypt (e.g., wedding certificates) used two inks and were written in two languages, Greek and Coptic. The Greek was written with a metal based ink containing copper but no sulfur, distinct but very similar to iron gall ink (written with a reed pen as was the Gospel of Judas), and the Coptic was written in a carbon ink, using a traditional brush. Therefore, the mixture of the two inks was deemed appropriate for the time period.

However, the lack of sulfur in the iron gall ink was still troubling. Typical iron gall inks from the sixth century and later were made with roughly equal amounts of iron and sulfur. Further study of the constituent elements of the ink on the Gospel of Judas indicated the source for the iron was not necessarily iron sulfate (as in most formulations) but something different. The study also suggested the possible inclusion of plant ash and of ground black minerals, including those containing iron, as components.

McCrone Associates determined the components used to create the ancient ink were consistent with ingredients in known inks from the third and fourth centuries A.D. One ink included a carbon black constituent, in the form of soot, bound with a gum adhesive. The other ink found in the document was an iron-based ink, which is thought to be a intermediate between the ancient world’s carbon-based inks and the modern iron gall formulations that became popular in early medieval times and are still in limited use today In their examination of the inks and papyrus samples, there was nothing in the findings to suggest that the document was not authentic.

Following the completion of the conservation and analytical studies by all teams involved, the manuscript was determined to be authentic and delivered to Egypt. The Gospel of Judas is now on display in Cairo’s Coptic Museum.