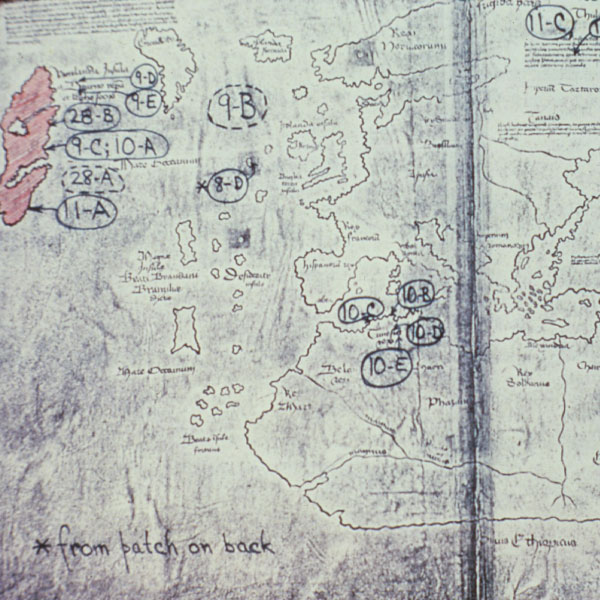 In 1973, just eight years after the Vinland Map was first revealed to the world, McCrone Associates declared it a modern forgery.

The only known map of a Viking voyage, the Vinland Map depicted the West European coast, Scandinavia, Iceland, Greenland and most importantly, parts of North America (known to the Vikings as Vinland). Scholars believed the map was drawn in the early 15th century, and if authentic it could provide further proof that the Vikings set sail to the New World long before Columbus.

The Vinland Map was found inside a book entitled The Tarter Relation, both of which were donated to Yale University in the late 1950s. In 1965, after seven years of analysis, Yale University Library revealed the Vinland Map to the world and claimed that it was genuine. The Yale analysis suggested the Viking voyage preceded Columbus’ by at least 50 years. Shortly after Yale’s claim was made public, scholars questioned the validity of the map because of its surprisingly accurate depiction of Greenland, which was drawn as an island on the Vinland Map. Ships at the time were not capable of traversing the arctic waters that surrounded Greenland to the north. To add to the speculation, British Museum researchers had previously determined that different inks were used on the Vinland Map and within the Tarter Relation book. They also noted that under ultraviolet light the ink behaved unlike any other medieval ink they had encountered in the past.

Yale University sent the Vinland map to McCrone Associates in 1972 for a comprehensive analysis of the inks utilized. As a leader in microanalysis, McCrone Associates had the technology and the experience to conduct an in-depth investigation.

Upon initial viewing with a stereomicroscope, Anna Teetsov, Senior Research Microscopist at McCrone Associates, determined that the map was “double-inked”. Maps of authentic medieval origin develop a yellow stain along the ink lines from the natural leaching of the ink into the parchment fibers over time. According to Teetsov, yellow ink was used to simulate the stain on the Vinland Map and then black ink was drawn over it, indicating that the parchment surface was altered to make it appear older than it actually was.

Ms. Teetsov was able to carefully lift 29 ink samples from the map for further analysis. The team then examined the samples using an array of ultramicroanalysis techniques such as polarized light microscopy (PLM), electron microprobe analysis (EMA), X-ray diffraction (XRD) and transmission electron microscopy (TEM) to determine the chemical makeup and crystalline structure of the ink.

The critical microanalysis studies were performed on the yellow stain found on the Vinland Map. These results of these tests showed that the yellow ink stain, visualized under the stereomicroscope, contained titanium oxide (TiO2) pigment in its 0.3 micrometer synthetically crystallized form of anatase. This form of TiO2 was only available in ink after its patent in 1917. According to Walter C. McCrone, “These particles are unique and impossible to have been prepared in 1440, 300 years before titanium was discovered and nearly 500 years before the chemical synthesis of pigment titanium dioxide was developed and, with great effort and expense, perfected to yield 0.3 micrometer anatase pigment.”

McCrone Associates concluded that the Vinland Map was a clever forgery using ink that was not available until the early 20th century. Their findings support the claims made by the British Museum that the ink was not of medieval origin.