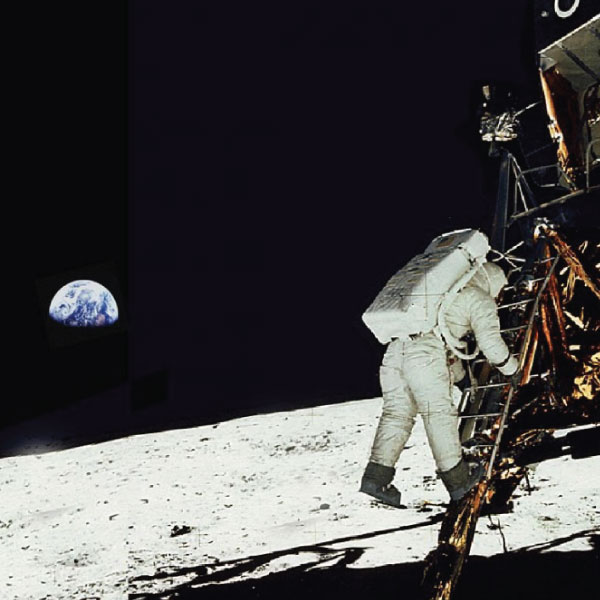 On July 20, 1969, astronauts Neil Armstrong and Edwin F. “Buzz” Aldrin, Jr. of Apollo 11 made a safe and smooth landing on the moon, at a level, rock-strewn plain near the southwestern shore of the arid Sea of Tranquility. About six-and-a-half hours later, the first men to land on the moon opened the landing craft’s hatch, and Commander Neil Armstrong stepped down the ladder, planted the first human footprint on the lunar surface, and made his historic comment, “That’s one small step for man, one giant leap for mankind.” Armstrong’s first steps were tentative because the nature of the lunar soil’s firmness, and his ability to move about, were unknown, especially with lunar gravity being one-sixth that of Earth. But, shortly afterward, he reported “the surface is fine and powdery. I can pick it up loosely with my toe. It does adhere in fine layers like powdered charcoal to the sole and sides of my boots. I only go in a small fraction of an inch, maybe one-eighth of an inch. But I can see the footprints of my boots and the treads in the fine, sandy particles.” After some 19 minutes of Armstrong’s testing, Colonel Aldrin joined him outside the craft, and the two started setting up television cameras, planting an American flag in the surface, deploying scientific experiments, and, perhaps most importantly for us, scooping up samples of rock and soil.

On their return to Earth with the lunar rock and soil sampler, astronauts and their collected samples were placed in quarantine, because nobody knew what, if any, harmful biological agents would be brought back also. When everything was deemed safe, the lunar rocks and soil samples were distributed to the various laboratories that were to do the analyses. Once all of the larger samples were distributed, what remained in the containers was known as the “lunar fines”. These were the particles that were small enough to become airborne, so that it became imperative to characterize them to see if they were different from Earth-based particles; that is, they could now be considered as contaminants in the Lunar Receiving Laboratory. A subsequent lunar landing to the Sea of Tranquility by Apollo 12 astronauts provided further rock and soil samples, whose <1 mm fines needed to be microscopically characterized, photomicrographed, and included in The Particle Atlas.

Samples of fine soil from the expeditions of Apollo 11 to the Sea of Tranquility, and Apollo 12 to the Ocean of Storms, were obtained through the courtesy of NASA. The Apollo 11 sample shown at 300X using slightly uncrossed polarizers represents the fines from Sample 10084, < 1 mm fines from bulk (selected) ALSRC sample—formally part of 1002. The Apollo 12 samples shown here using slightly uncrossed polarizers at 125X and 300X represent the fines from Sample 12070, collected 10 meters northwest of the Lunar Module.

The Apollo 11 samples are largely basaltic rock (s.g. ~ 3.3) breccia, and glass fragments; also anorthositic material (s.g. ~ 2.9). Anorthosite fragments may show bits of plagioclase, olivine, and pigeonite. The principal minerals of crystallized lavas include pyroxene, plagioclase, and ilmenite. The ilmenite is interesting in that, unlike terrestrial samples, the titanium content is relatively high. The well-publicized glassy spheres in the lunar soil can be seen in the top image, which shows one of the larger, darker spheres; a number of smaller glassy spheres are shown in the second image (they bear a resemblance to effluent from Earth-based power plant fly ash). The soil glasses vary in composition; the average composition (% weight) of twenty-one glasses show SiO2 (42%), TiO2 (7%), Al2O3 (14%), FeO (16%), MgO (9%), CaO (12%), Na2O (0.3%), K2O (0.2%); sometimes there is more aluminum or iron, and less calcium. The Apollo 12 samples show olivine, pyroxene, plagioclase, and pyroxene-phyric basalts. About 10-15% of each sample here is magnetic; the magnetism is due to ilmenite, FeTiO3, the black, opaque particles in the photomicrographs.

None of the lunar samples here fluoresces in ultraviolet (365 nm) light, or in blue-violet (400 nm).

All data and illustrations here are included in the print version of The Particle Atlas, Edition Two.