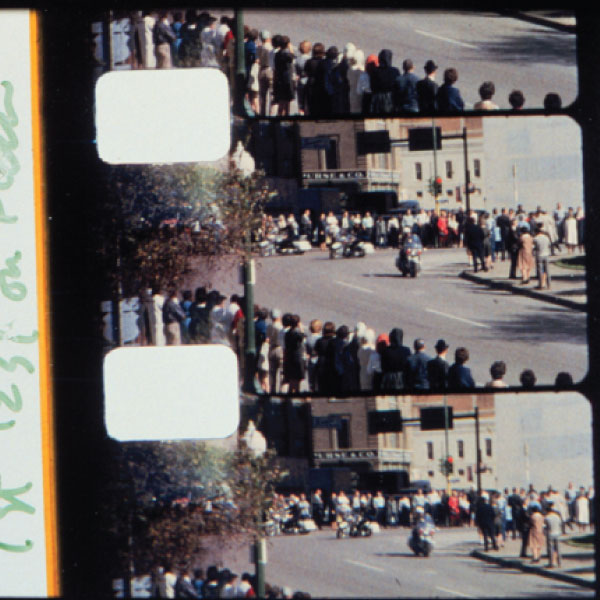 In March 1997, McCrone Associates, working with the National Archives and the family of the late Abraham Zapruder, played a crucial role in the preservation of Zapruder’s 8 mm film of the assassination of President John F. Kennedy. Joseph G. Barabe, McCrone Associates Director of Scientific imaging, was called to the National Archives II facility in College Park, MD, to produce a set of high-quality 4” x 5” color transparencies of every frame of this controversial film.

On November 22, 1963 in Dallas, Texas, Abraham Zapruder captured the only filmed record of the assassination of President John F. Kennedy. Zapruder sold the film rights to Life Magazine for $50,000 in 1963. The rights were eventually transferred to Time Inc., which sold them back to the Zapruder family for $1 in 1975. In 1997, the Zapruder family decided to digitally enhance the film not only for preservation purposes, but also to improve resolution and clarity, and help visualize the information located between the sprocket holes of the original 8 mm film. This process and the enhanced version of the film were captured by MPI home video and made into a documentary titled “Image of an Assassination: A New Look at the Zapruder Film.” Joseph G. Barabe from McCrone Associates, who assisted in the restoration process, appeared in the documentary aired on television in 1998.

The project required the solution of numerous problems in photomacrography and historical conservation. The images had to be of the highest resolution possible, with a high degree of consistency in density, color balance and magnification. Furthermore, this fragile film of enormous historical importance could not be damaged in any way from the handling and additional photography.

For the photomacrography process, the 493 frames of the original 8 mm film were photographed using an Aristophot photomacrographic camera combined with a transparency duplication light source. The three separate light source bulbs were calibrated precisely to handle the tonal scale of transparency film. A system was developed to efficiently present each frame of the 8mm film to the camera while providing maximum protection. The camera, the light source, the transport system and numerous accessories were shipped to the National Archives II from Westmont, IL. After calibrating the film with the local processing lab, McCrone Associates and a crew of expert assistants worked to finish the photography.