When Kris Bryant slipped while throwing to Anthony Rizzo for the final out in Game 7 of the World Series, his dirt-caked cleats dug into Cleveland’s rain-slicked Progressive Field

Harry Caray restaurateur and collector Grant DePorter not only paid $35,000 for those shoes—he had the dirt examined.

What he and several Cubs pals see in the microscopic images are symbols—perhaps signs of divine intervention—that include a Cubs “C,” the team’s bear head logo and even Harry Caray, the late Cubs announcer.

“Definitely there’s a spiritual element to anything tied to the Cubs,” said DePorter, who plans to give the cleats and other 2016 items their debut at Kerry Wood’s charity event at the Navy Pier Harry Caray’s on Friday. “In my mind sports is a religion in Chicago. The pieces of memorabilia that I’ve been acquiring are like the holy relics of that religion. I’m definitely a believer.”

At DePorter’s request, McCrone Associates used an electron microscope to amplify the soil sample by a factor of 108 (the number of years of the franchise’s title drought, of course). 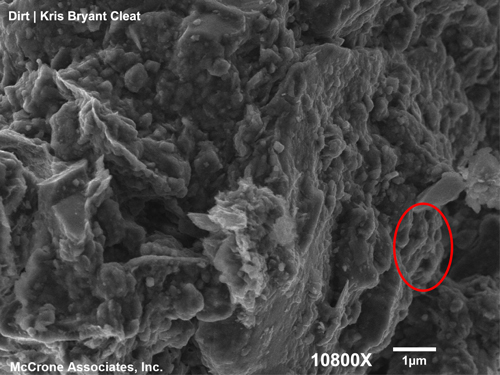 Not everyone sees such gems in the clumps of dirt. The “C” and the bear head “jumped out” at McCrone President David Wiley, but when DePorter asked him if he saw Caray, “I’m looking at it and I’m thinking, ‘What does he mean by this?’ It took me a minute to see what he was seeing in the image.”

“Certainly Grant’s enthusiasm with regard to the divine intervention part of this and Harry playing a role, is very intriguing,” Wiley said.

Michael Lantieri, the Oscar-winning special effects man who blew up the Bartman ball, “had a little difficulty with the Harry. I had to stretch a little bit. The ‘C’ and the bear was clear as a bell. I was shocked.”

DePorter acknowledged, “Some people wonder if those are Harry’s glasses. … You can see his nose, his cheeks, his open mouth. It’s a classic Harry image.”