A Webcam Looking Through the Microscope

A webcam’s primary purpose is to create streaming video images for Internet use. Small file size is a necessity for reasonable transfer speed; therefore, 320 x 240 pixels is the typical, and 640 x 480 is the highest chip resolution available.

In terms of image resolution these are not dream specifications, but 640 x 480 is comparable to the resolution of a conventional TV image which serves many microscopists well. Of course, by choosing a high enough magnification one can resolve anything the optics deliver as long as one is willing to sacrifice field size in return. So, it seemed reasonable to try a webcam as a companion to my microscope.

I chose the Logitech QuickCam® for Notebooks Pro. Its CCD is of the quarter-inch type (3.5 x 2.6 mm) with a 640 x 480 array of square pixels. The driver allows one to increase the image to megapixel size by interpolation, which does not increase the resolution, but reduces pixelation.  As far as webcams go, this is as good as it gets.

The camera is connected to the computer with a USB cable, any PC with Windows 98SE or later should work.

The QuickCam® has a focusable objective of f 4.9 mm, which, in terms of the viewing angle, is similar to a 50 mm lens on a 35 mm camera. It focuses down to about 6 inches.

For micrography, the camera, with its lens set to infinity, is mounted on top of an eyepiece.  Some experimenting is needed to find the distance where the lens lies exactly in the plane of the eyepiece’s exit pupil to prevent vignetting. My holder is made from scraps of plywood, with wooden alignment rails glued to both sides of the camera; it fixes the distance between eyepiece and camera at 7.6 mm (Figure 1). Double-sided tape holds the holder and the eyepiece together. 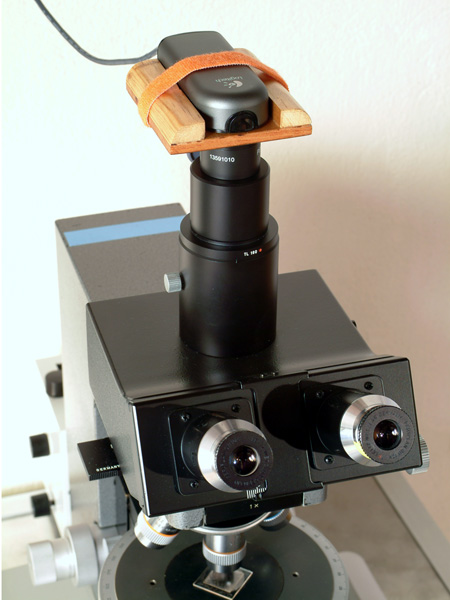 The choice of eyepiece is important. To fill the area of the chip, the product of magnification and field number must be at least 210. So, with a 10x/18 eyepiece the corners will be cut off. I used a Leica 15x/14 eyepiece (Leica product number for a pair: 13591010) which will fill the chip’s active surface with just a hint of vignetting.

The magnification in the plane of the chip is the product of the optical components in its path:

Like scientific digital cameras, this webcam is tethered to a computer. Adjustments to the exposure time, contrast, and color temperature can immediately be assessed on the live image. An intervalometer with a range of interval times from 1 second to 119 hours and a simple archival program are part of the software.

The ‘speed’ of the chip is equivalent to about ISO100; the longest exposure time in manual mode is 1/15 second. That does not sound like much, but it’s pretty good if you consider that the chip’s active area is about 1% of a 35 mm frame and that the exposure time is proportional if the same field were captured at the same ISO equivalent. I have successfully taken DIC images at high powers with a standard tungsten halogen light source; fluorescence, however, is out of the question.

The included software permits editing of still images (MGI photosuite SE) and video clips (MGI videowave SE). Editing in videowave could not be easier; very little time is needed to feel comfortable with this program.

The QuickCam® produces acceptable still images for incorporation into two-column text documents, but printed to fill a page, say 8 x 11 inches, the limitations become apparent. A montage of four images on one page, however, looks OK (Figure 2). When digital images are projected, the quality of projection and the viewing distance often are limiting factors. Even an eight megapixel image may appear to be reduced to something that isn’t that much better than a good  image. The integration of a few webcam images in a PowerPoint® presentation is not absurd. 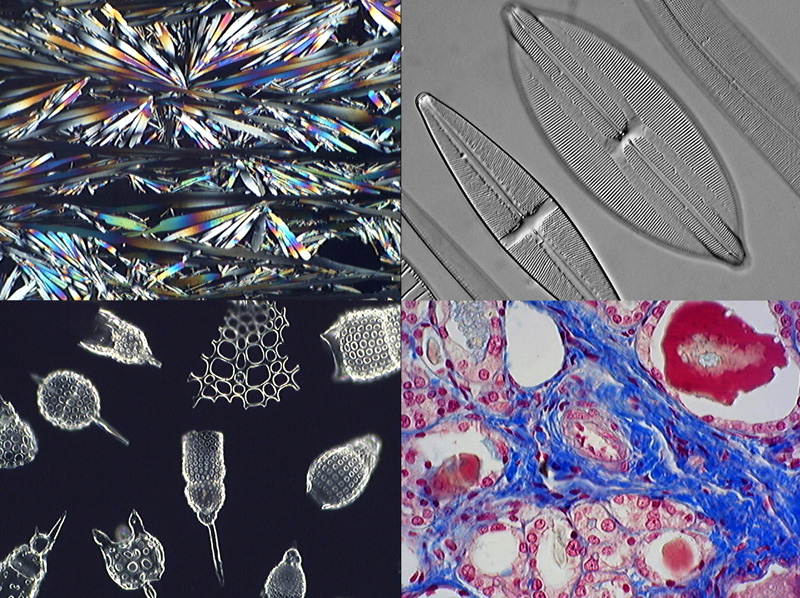 But really, it is as a movie camera that the webcam comes into its own. The slow processes of the re-crystallization of organic acids, etc. become a wonderful spectacle when accelerated 100 times. The Logitech software permits running the camera in single frame mode; you capture a frame, rotate the stage two degrees, capture the next frame, and so on. Using this method, you capture 180 frames per 360° rotation of the stage. If the video is shown at 30 frames per second, it takes six seconds to replay a complete rotation of the stage.

Without nostalgia, I think back to the time when I took time lapse movies with an 8 mm film camera, staying up half the night, releasing the camera once every 20 seconds. The expense for film quickly busted the month’s budget. I still marvel at my wife’s tolerance for strips of film pinned to her clothesline for editing, rendering it unavailable for less artistic pursuits!