Automated particle analysis (APA) using scanning electron microscopy (SEM) and energy-dispersive x-ray spectrometry (EDS) is a method used to analyze large numbers of particles—typically 1,000 to 1,000,000—for size, shape, and elemental composition. The method combines the high-resolution imaging of SEM and microanalysis capabilities of EDS with automation to analyze large populations of particles, to address questions impossible to answer by manual analysis.

The types of problems that can be solved by APA include searching for rare materials in mixtures, correlating particle size and shape with composition, and characterizing particle populations without bias. Common applications are:

McCrone Associates has used APA to analyze samples for many industrial, academic, and government clients. Perhaps the best way to appreciate the value of APA, and the possibilities from analysis of large numbers of particles, is by examples of APA projects. Three examples of APA will be presented, each of which required analysis of tens of thousands of particles in order to find a solution.

A customer asked McCrone Associates to characterize the contaminants in a raw material used in drug production. A sample of the raw material was dissolved and filtered, and the insoluble particulate was analyzed by APA. Particles can be described by composition, size, and shape, as shown in this table: 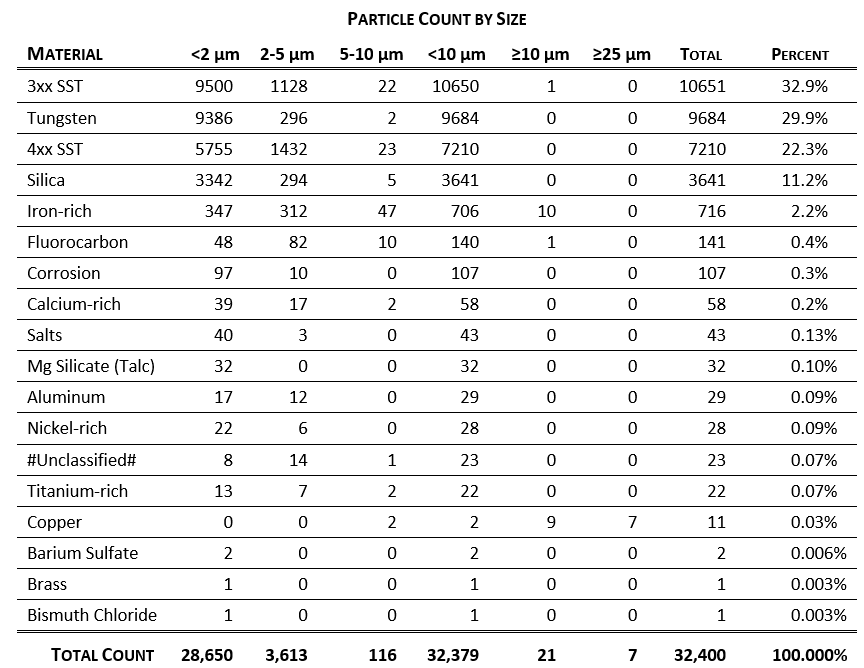 The most abundant particle types are stainless steels (SST), tungsten, and silica. All three materials were linked to specific steps in the manufacture of the material. Large, copper-colored particles observed by the client were identified as copper, but were determined to be only about 3 in 10,000 of the insoluble particles in the raw material.

A customer asked McCrone Associates to identify the wear debris collected from an engine. Three Fe-Ni-Cr corrosion resistant (CRES) alloys are used in the engine, which may be identified by EDS elemental analysis. Wear particles collected on filters were analyzed by APA. As shown in this ternary plot, particles of these alloys were distinguished with no overlap (99.7% error ellipses): 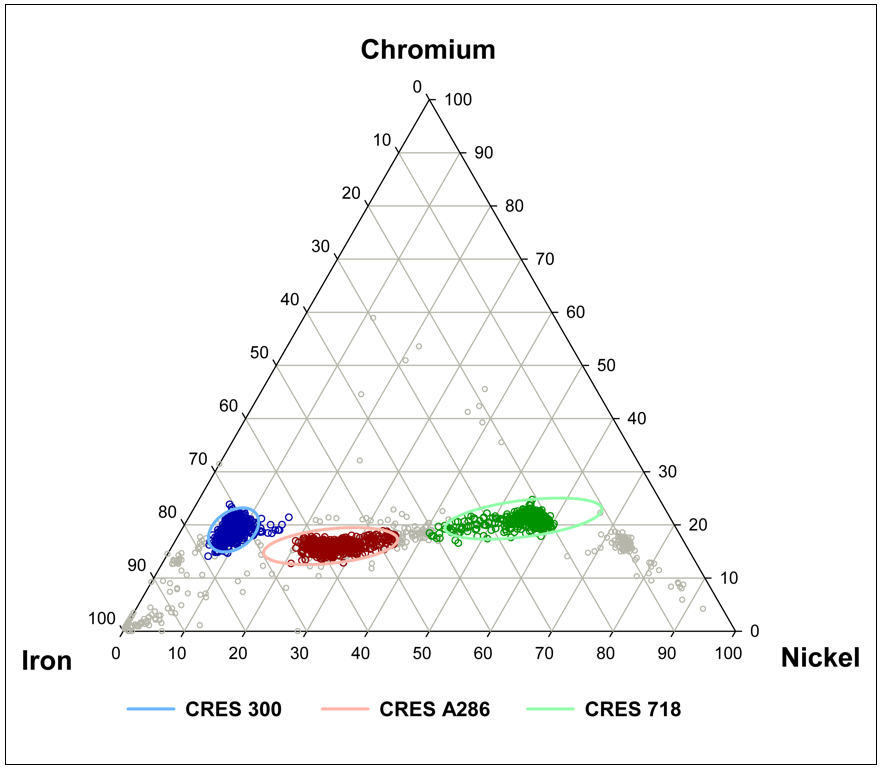 Based on consideration of the number and size of the wear debris particles of each of the alloys, the customer made changes to the design and material specification of the engine’s components to decrease wear and improve engine life.

McCrone Associates participated in a study of airborne tungsten (W) particles collected on filters for an environmental application. Particulate collected at several distances from a suspected source were analyzed by APA for tungsten particles, which comprised, in some samples, only a few particles per thousand of the particulate. As shown in this plot, the abundance of tungsten particles has a power law dependence on distance from the suspected source: 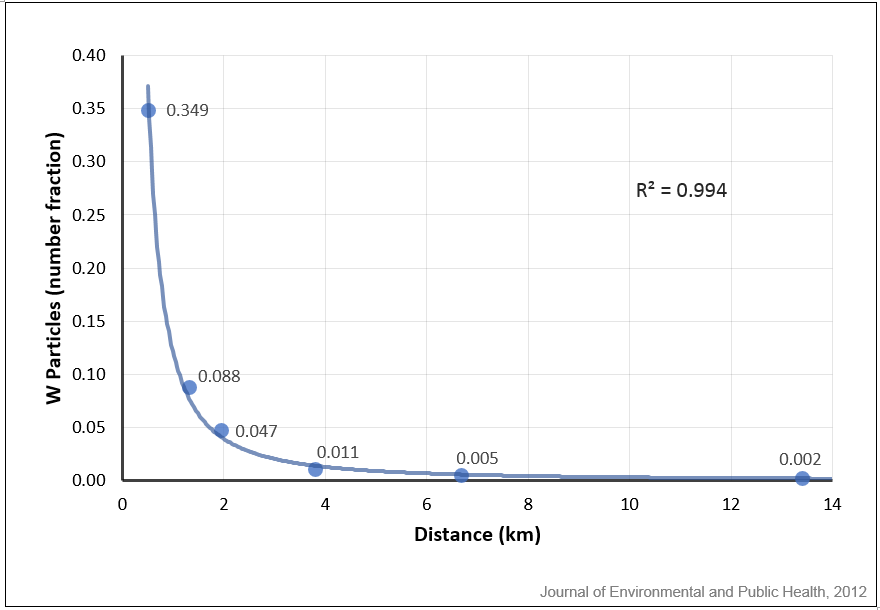 Based on the results of this study, environmental scientists were able to differentiate various sources of tungsten in the environment, and characterize the composition and size of the tungsten particles.

These three examples illustrate some of the types of problems that can be answered by APA using SEM-EDS. Any particle sample that is suitable for SEM-EDS can be analyzed using APA, but proper sample preparation is essential to obtaining the best results. Samples for APA must be prepared as particle dispersions with minimal agglomerated or touching particles, but also with high particle densities to provide a large population of particles for analysis. Scientists at McCrone Associates have experience preparing many types of samples and particles for APA, and would be happy to work with you to design an investigation suitable for your samples and application.

Hello, could you tell me what EDS system you are using and whether you are combining the signal of several detectors or only one.
Also, is there a published sample preparation method available to ensure the separation of the particles?
Many thanks,
Evelyne Delbos

Thank you for your interest in our article. Most of the work was performed using an Aspex automated SEM with an OmegaMax EDS detector. This system has only a single EDS detector, but by the end of the year we will have a Tescan instrument with three EDAX EDS detectors for higher count rates and reduced shadowing. Here is the article describing our sample preparation for the tungsten particle study. Similar preparation methods can be used with many samples to get good particle dispersions.
http://dx.doi.org/10.1017/S1431927607070237

hello,
Is there a (practical) reason why the TableTop SEM's do not have APA?
None of them can store the XY coordinates. (my question at McCrone Jeol webinar).

Thank you for your question, Jan. Until recently, there was not a motorized x-y stage available on the NeoScope benchtop SEM.