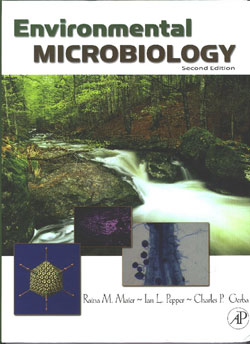 Environmental Microbiology; From Genomes to Biochemistry 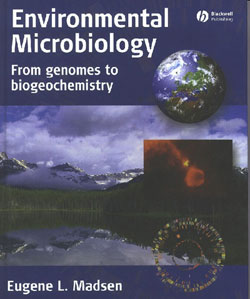 Science and the Microbial Sea of Life: Two Recent Textbooks on Environmental Microbiology

As interest in ecology and environmental problems has grown in the past quarter century, microbiology has played an increasingly important role in providing us with information about the microbial foundations of the living world around us–not only the small number of pathogenic species, but also the much larger group of non-pathogens resident in air, water, earth and ourselves. Developments in environmental microbiology have reached the point where an enormous amount of current knowledge of the subject can now be assembled into a textbook suitable for a one semester, upper-division undergraduate or graduate level university course.

Two recent offerings of such textbooks appeared in 2008 with the same title: Environmental Microbiology. One is the second edition of a book originally published by Academic Press in 2000. The other is a new offering by Blackwell Publishing.  But while these two excellent works cover the same ground and both articulate the key importance of new techniques in microscopy for this rapidly growing field of study, they are different in very significant ways-which we hope to make evident in this comparative review.

The Maier-Pepper-Gerba (MPG) book is written by a panel of scholars and researchers recruited by the three primary authors, whereas Eugene Madsen is the sole author of the new Blackwell book appearing under his name. While the MPG book retained nine of the thirteen original authors of the first edition, in its second edition five new names appear.  Several entirely new chapters have been added, and virtually all the other chapters have been greatly expanded or revised.  The book is complemented by a second volume of practical laboratory exercises by several of the same authors, meant as an accompaniment to the textbook for anyone wanting to use them both for a college lecture course with a laboratory component.

It is evident that the authors of the second edition of the MPG text have adopted a rigorously “bottom-up” empirical approach, assembling all that is currently known on the subject, and basing it closely on published work and experimentally verified evidence.  The book is assembled under eight topical sections:

Nearly every page of the text is populated with tables, information boxes, colorful diagrams, figures and equations, and with the end of chapter references there is enough material to keep a diligent student burning the midnight oil for weeks and months.  A good example is pictured below.

Approaching this work from the viewpoint of a microscopist, I found the writing to be dense but lucid, and the central six methodological chapters the most challenging and interesting.  While the first six chapters set the contextual stage by presenting a summary of what is known about microbes, how they grow, and where they live, that is but a prelude to what immediately follows. The real revolution in this field of study has occurred due to rapidly expanding techniques for determining the numbers and varieties of species that occupy these environments, and how they interact. This includes the use of fluorescence and other microscopical techniques, molecular probes, tests for genetic specificity, DNA sequencing, biomolecular amplification systems, etc.—an amazing array of sophisticated techniques and tools that have forced microbiologists to recognize that the number and variety of microbes inhabiting this planet are far greater than those which have been identified in the past by traditional in vitro laboratory methods of culture, isolation, differentiation by selective growth media, and chemical analysis of physiological metabolites. It is now well known that the vast majority of microbes are not yet able to be cultured in the laboratory, and hence must be studied in situ in their natural environment, or via specially designed techniques in the laboratory. The story of the methodologies leading to these revolutionary discoveries is the substance of the chapters in Part III, and it is these that the reader will pour over late into the night – and with the greatest benefit.

Practitioners in the field, however, may find the later chapters particularly relevant as applied to the problems facing practicing scientists in an increasingly industrialized and human-populated world.  The sections on bioremediation of toxic organic and metal products in the environment, the use of microbes as indicators, and the handling of increasing amounts of sewage and other waste materials, are particularly interesting in this regard.  In the wake of 9/11, new chapters have been added on bioterror microorganisms and risk assessment that will put the chilling prospects of such potential weapons of mass destruction (WMD) attacks in proper scientific perspective.

Environmental Microbiology; From Genomes to Biogeochemistry

Many of these same topics are taken up and discussed in Madsen’s book, but the orientation is entirely different. Madsen attempts a “top-down” view of his subject matter, adopting a more deductive approach based on generalizations drawn from evolution, thermodynamics, habitat diversity, physiology, and ecology – the five components of his two-dimensional “house” stated as an analogy in the first chapter and visually sketched on page 454 in the final chapter. These are presented in summary fashion in the first four chapters of the book: an overview of the field (Chapter 1), key biogeochemical and evolutionary events forming the biosphere (Chapter 2), microbial resource explorations as revealed by physiological ecology, focusing in particular on biochemical energy patterns (Chapter 3), and a geo-environmental survey of the earth’s microbial habitats (Chapter 4).  The schematic of the model is pictured below.

In these chapters Madsen paints in broad brushstrokes, and yet with remarkable detail, a landscape that constitutes something of a systems-biological approach, in order to present the reader with a conceptual framework on which the rest of the book rests. Madsen’s focus on physiological energy pathways is particularly well done. But because the overall picture is still largely incomplete, there are sections that appear somewhat inferential and speculative—e.g. in sections 2.3 entitled “Plausible stages in the development of early life,” and section 2.7 entitled “A plausible definition of the tree of life’s ‘last universal common ancestor’” – and even a “citizen science” section dealing with the possible Martian origin of earthly life. While Madsen is careful to delineate what is experimentally or paleobiologically verified and what is speculation, these sections stand in contrast with the more concrete science presented in subsequent chapters.

That scientific work really begins in earnest with Chapter 5–“Microbial Diversity: Who is Here and How do we Know?” Notice that this is pretty much where the Maier-Pepper-Gerba volume begins (as their Chapter 2). This chapter draws heavily on carefully delineated evolutionary linkages, from recent genomic work resulting in what is now called “cladistics” or “systematics” (replacing the older “taxonomy”).  Chapter 6 provides a rich exploration of the methods used to generate and interpret microbiological information in the earthly environment, including fieldwork and laboratory methodologies (DNA analysis, electrophoresis, immunofluorescence, metagenomics, hybridization, cloning, etc.)–some summarized in tables that run on for many pages.

These are dense and difficult books to read even for someone familiar with the sciences which ground them. While there is a profusion of helpful summary tables, illustrations, info-boxes and study questions, the sheer volume of technical information is quite intimidating, but well worth the effort it takes to understand and digest it.

I have two personal gripes about the editorial production of these books. A profusion of acronyms is unavoidable in scientific writing of this sort, and the use of them is widely accepted, and greatly decreases the sheer typographic bulk of the texts. But acronyms sometimes place an unnecessary burden on the reader’s memory that might easily be alleviated by assembling a separate acronym index or glossary at the end of the textbook for ready reference by the reader. Without it the reader is driven to thumbing through pages of text trying to find where the acronym was first introduced–a complete waste of time given the state of computer technology in publishing today.

My second gripe is about colored-background tables and info-boxes and such.  While this makes for easier text-navigation it often places undue strain on the reader’s eyesight.  I have particular difficulty seeing black print on a blue or purple background, so staring at the profusion of data in a blue table spread over multiple pages is discouragingly difficult–and needlessly so.

So which book should you buy?  If you are a research or teaching professional, I suggest getting them both. The Madsen book deserves special recognition for its bold and sweeping vision for the future systematization of environmental microbiology.  But for solid classroom work the Maier-Pepper-Gerba volumes have the clear edge, not only because of the coupling of separate text and lab exercise volumes, but also because the second edition of this classic textbook has earned its pride of place, having been assembled from the work of over a dozen scientists qualified in their specialized fields of study.