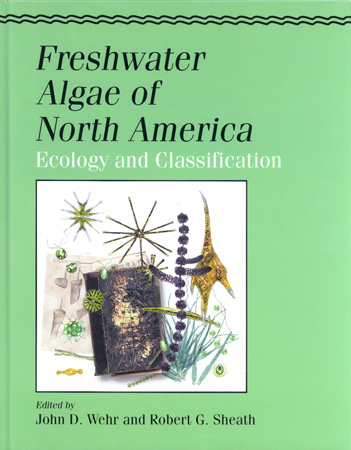 Freshwater phycologists and aquatic microscopists will welcome this book as the first comprehensive, single-volume treatment of the freshwater algae in over half a century.  The study of freshwater algae in North America has a rich history, with monographs, such as those by the Rev. Wolle, going back to the late 1800’s.  Until now, microscopists have relied on the still useful monograph by G.M. Smith:  Freshwater Algae of the United States; McGraw-Hill, New York (1950), with its coverage of a broad geographic region, as well as regional works such as G.W. Prescott’s Algae of the Western Great Lakes Area, 2nd Edition, W.C. Brown Co., Dubuque, Iowa (1962), and certain other texts including A Manual of Fresh-Water Algae, by L.A. Whitford and G.J. Schumacher, Sparks Press, Raleigh, N.C. (1984); Algae; An Introduction to Phycology, by C. Van den Hoek, D.G. Mann, and H.M. Jahns, Cambridge University Press, Cambridge, UK (1995); Algae, by L.E. Grahm and L.W. Wilcox, Prentice-Hall, New Jersey 2000).  In recent years, however, there has been an enormous amount of remarkable research on this diverse group of organisms, making all other books prior to this one out of date, especially with respect to taxonomy and ecological matters.  It is the goal of the present book “to synthesize and update much of this vast knowledge, and to provide a practical and comprehensive guide to all of the genera of freshwater algae known from throughout the continent, in one volume”.  Of course it is no longer possible for one or two authors to produce an authoritative book of this kind, so that the present editors have assembled a team of twenty-seven contributors, each a specialist in their area, to prepare the present volume.  Although this book will take the user to North American Algae genera, the individual chapters also provide guides to other publications, keys, and specialized works for the identification and ecological information at the species level.

The many black-and-white illustrations, include drawings, light micrographs, and SEM micrographs.

In North America, the variety of freshwater habitats colonized by algae is very rich; algae occupy an enormous range of ecological conditions from lakes and rivers to acidic peat bogs and swamps, snow and ice, inland saline lakes, desert soils, wetlands, damp soils, wastewater treatment plants, and they are also symbionts on and in many plants, fungi, and animals.  For this reason, algae are of interest not only to phycologists, but all scientists working in aquatic environment specialties, such as environment monitoring, ecology, evolution, systematics, biodiversity, and molecular biology.  Industrial microscopists encounter algae often, particularly as contaminants and nuisance factors in water supplies.  Even serious amateur microscopists will want this book for aiding the identification of algae to the genus.

The Editors and their Contributors have done an outstanding job in synthesizing this mass of data, and there is no doubt that this work will be a standard reference, to be followed by up-dated editions.

Incidentally, this book is a companion volume to the same publisher’s Ecology and Classification of North American Freshwater Invertebrates, 2nd Edition, edited by Throp and Covich.  Together, the freshwater microscopist can have it all covered!