by Max Houck and Jay Siegel 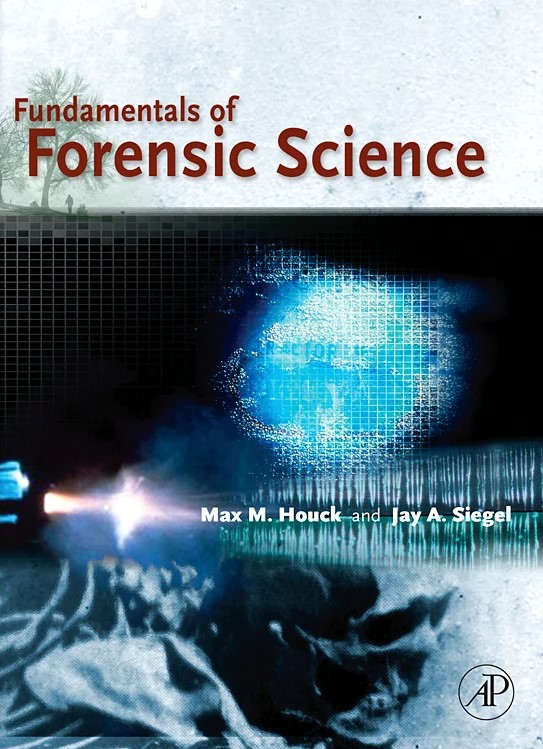 Fundamentals of Forensic Science is organized somewhat along the timeline of a real forensic case.  There are 23 chapters that begin where forensic science begins (Part I): with an introduction to forensic science, crime scene processing and the nature of evidence.  The text is then divided into an additional five logical parts.  Part II –Analytical Tools includes microscopy, spectroscopy, and separation methods.  Part III—Biological Sciences includes pathology, anthropology, odontology, entomology, serology, bloodstain patterns, DNA and hair.  Inclusion of pathology, anthropology, odontology and entomology may be a surprise and unconventional for a criminalistics textbook; but, the authors were correct:  all forensic scientists need an understanding of the context in which they practice their profession.  What is forensic science without the dead and decayed?  Part IV—Chemical Sciences includes drugs, toxicology, fibers, paint, soil, glass, fires and explosions.  Part V—Physical Sciences includes finger and palm prints, questioned documents, firearms, toolmarks, footwear impressions and tireprints.  The text ends (Part VI) with the relationship between the law and forensic science including the rules of evidence and testimony.  There is an extensive and useful index. Numerous color illustrations (drawings and images), case examples ripped from the headlines, and other tidbits of valuable information supplement the text.

Throughout, the textbook emphasizes the interrelatedness between the context of the case (crime or accident), the physical evidence, and the questions raised in the investigation regarding the people, places and things involved.  The authors make the point: “The scene of the crime is the focus of the forensic laboratory.  It is where everything starts and is the foundation upon which all forensic analyses are based.”  The subtle reason is that the crime scene will never exist again and all the physical evidence regarding the relationships between people, places and things is there.  Likewise, microscopy is recognized as the mainstay of forensic science.  The subtle reason is that microscopy is the way to look at all those things involved and relate them to the context of the case, the people, places and other things.  All the functions in a full service forensic laboratory have one thing in common:  “A microscope is used in some fashion because the items examined are small.”   Along the same lines, the authors do an excellent job at describing the nature of forensic evidence, particularly
with regard to the significance of the interaction between the victim(s) and the criminal(s).  The use of three color-correction filters to illustrate the interrelatedness of the victim, criminal and crime scene is an excellent example of how the authors illustrate relatively complicated concepts with well-designed models.

Probably because I think more about particles than solutes, I find the separation methods lacking a little too.  Three are discussed:  liquid phase extraction, solid phase extraction and chromatography.  There are three other methods that are fundamental to trace evidence analysis:  filtration including vacuuming, density separation and sticky tape lifts.  Tape lifts are mentioned in passing later in the text, but never fully explained.  Likewise, the physical match is mentioned only in passing (documents, paint, glass), but never described as a fundamental forensic technique.  Like most of the forensic literature, Fundamentals of Forensic Science assumes (I presume) that fracture matching is intuitive enough that everyone should understand its principles from birth, or at least from the time they first played with jigsaw puzzles.  On the contrary, there are specific scientific principles that apply to making physical matches.  For example, before a valid association can be claimed, the fractured pieces must be realigned; the pieces must interfit along an irregular edge-to-edge border verified by surface markings or verified by a three-dimensional fit; and the pieces must possess accidental characteristics or a unique design.  One more thing—contamination and controls are discussed, but there is no mention of ways to use controls to monitor contamination; only analytical controls are described.

The deficiencies are few and can be overcome easily with lecture materials.  In all other regards, I found the textbook to be filled with good instruction and accurate and sound advice. Teachers will find the chapter organization helpful in designing a forensic science
syllabus.  Students, no matter at what level, would receive a valuable introduction to forensic science at a fair price by using this textbook.  Practicing forensic scientists will find it useful as a source for easy explanations of their work.  This textbook is distinguished from other popular forensic science textbooks by its visual elements that make the subject matter more understandable and more interesting.  The drawings, illustrations, tables and images in Fundamentals of Forensic Science are colorful, imaginative and always instructive, unlike other texts where black-and-white photographs are inserted seemingly just as fill with no particular purpose other than to demonstrate that the author possesses them.  Learning is also assisted by feature boxes scattered throughout the text describing historical events, technical details, internet resources and laboratory experiments.  The inclusion of internet websites seems to provide the student with a modern means to learning.  I recommend that all you folks out there teaching forensic science look first to Fundamentals of Forensic Science as your textbook.