Everybody is familiar with, or at least aware of, modern trading cards. A trading card is a small card made out of thick paper or paperboard that contains the image of a person, place, thing, or event, with a short description on the reverse side. Today’s trading cards traditionally depict sports figures, with baseball cards being especially well known. In 2007, a single trading card bearing the likeness of Honus Wagner, a turn-of-the-twentieth-century U.S. baseball player, was sold for $2,350,000, and later that same year, it was sold again for a record $2,800,000! The reason for the card’s rarity is that it was to be issued by America’s biggest tobacco corporation, and Wagner was a non-smoker who objected to the issuing of the card. Legal action followed that prevented release of the card, but somehow four cards are said to have slipped out—it was one of these that was auctioned for such a large sum.

Trading cards actually have, as their ancestor, trade cards. The earliest form of trade cards, which preceded business cards, are found at the beginning of the seventeenth century in London. They were used as advertising, or maps, directing the public to merchants’ stores, there being no well-developed newspapers or street numbering system at the time. These trade cards were printed in monotone until the introduction of color lithography around 1830. Eventually, these trade cards were inserted in the product itself, with some of the earliest examples inserted into paper packs of cigarettes to act as stiffeners to protect the product. Allan and Ginter in the U.S. in 1886, and W.D. & H.O. Wills in Britain in 1888 were the first tobacco companies to insert color lithographed cards in their cigarette packages. Once the cards started to depict sports figures, animals, inventions, transport, cars and motor racing, war and military, etc., the collecting of these trade cards became so popular that by 1900 there were thousands of tobacco card sets manufactured by over 300 companies. Following the success of cigarette cards, manufacturers of other products started including trade cards inside their products, such as candy, tea, biscuits/cookies, cocoa, chewing gum, coffee, etc.

It should not be surprising that eventually, after series of cards from two to 25 or 50, or even 100 related subjects depicting famous actresses, sports figures, heraldry, city views, military heroes, inventions, etc. etc. were issued, there would be a series issued depicting microscopic plants and animals. In fact, scores of series of microscopical trade cards have been issued over many decades, and it is proposed here to describe a selection of these.

One of the most beautiful of the microscopical series of trade cards was one called “Hidden Beauties,” issued by John Player & Sons. In 1877, John Player bought a small tobacco factory that William Wright had started in 1828. Player’s innovation was to offer pre-packaged tobacco, prior to which smokers bought tobacco by weight from loose supplies, and cigarette papers to roll it in. Player was one of the first to include trade cards in the cigarette packs as a stiffener, and the first set of cards, produced in 1893, was “Castles and Abbeys”; other well-known sets included “Footballers” (1926), “Civil Aircraft” (1935), and “Motor Cars” (1936). More than 200 different sets of their trade cards were reprinted in the 1990s.

“Hidden Beauties,” issued in 1929, is a series of 25 cards (2⅝” x 1⅜”) depicting, first, a light microscope, along with a quotation from Shakespeare (“In Nature’s infinite book of secrecy a little can I read”), followed by 24 beautiful color lithographed images of microscopic specimens. Interestingly enough, when England issued postage stamps in 1989 marking the 150th anniversary of the Royal Microscopical Society, a set of four of these commemorative stamps appeared on a First Day Cover which also depicted Card No. 1 from Player’s “Hidden Beauties” series. Please click on the first image below to open full-sized versions in a gallery lightbox.

The W.D. & H.O. Wills Tobacco Company, which like John Player & Sons, became part of the Imperial Tobacco Company (of Great Britain and Ireland) Ltd., issued a series of cigarette cards devoted to “Famous Inventions.” Amongst this series, which included Steel-Frame Building, Modern Submarine, Lavassor’s Motor Car, and Transporter Bridge, was Microscope. The front and reverse sides of this 2⅝” x 1⅜” card are illustrated below. 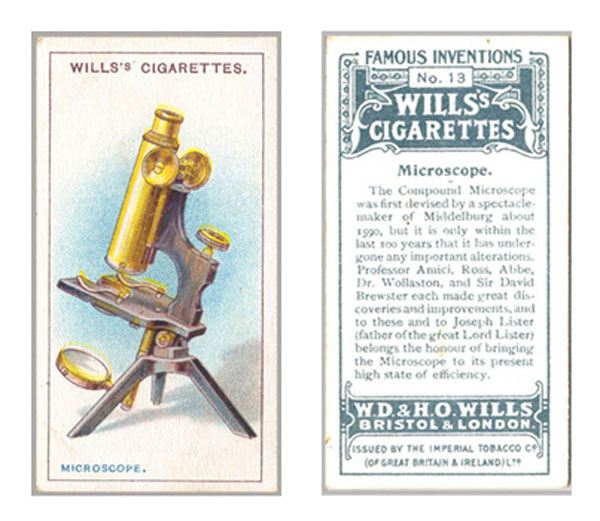 “Marvels of the World,” Insect Heads under the Microscope

This rare complete set of 12 cards dating back to 1950 was presented in Swiss chocolate bars and products from Nestlé, Peter, Cailler, Kohler chocolates. The cards, which are paper-thin and measure 2-1/4” x 1-9/16”, comprise Set 31 from the Marvels of the World series, and feature magnified insect heads.

This is another rare complete set of 12 cards dating back to 1932, as issued by Nestlé, Peter, Cailler, Kohler in Swiss chocolate bars and chocolate products. The 2-1/4” x 1-9/16” paper-thin cards comprise Set 39 in the Marvels of the World series, and feature marine plankton.

“Marvels of the World” Hidden Beauties

This complete set of 12 cards dates back to 1950 and was issued by Nestlé, Peter, Cailler, Kohler in Swiss chocolate bars and chocolate products. The The 2-1/4” x 1-9/16” cards comprise Set 60 in the Marvels of the World series; they feature a number of Hidden Beauties, including radiolaria, snowflakes, and insects.

This rare, complete set of 12 cards dates back to 1950 and was issued by Nestlé, Peter, Cailler, Kohler in Swiss chocolate bars and chocolate products. The 2-1/4” x 1-9/16” cards comprise Set 122 from the Marvels of the World series, and feature microscopic plant life (diatoms). The descriptions on the reverse sides are in French and German.

“A Drop of Water under the Microscope”

This rare and original set of six cards was issued in 1931 by Liebig, Libox, Oxo in packages of bouillon. The 4¼” x 2¾” stiff cardboard cards bear beautiful images of microscopic plant and animal life in the series titled “Gouttes d’eau sous le microscope” (A drop of water under the microscope).

This interesting set of six cards, not for the squeamish, was issued by Liebig in 1961. The 4¼” x 2¾” stiff cards depict the microscopic life cycle of the parasitic disease Bilharziasis (Schistosomiasis) from egg and “miracidium” stage, through the intermediate host (snail), to the penetration of the skin of the human being, and the transformation into the male and female schistosome that are responsible for the parasitic disease Schistosomiasis (Bilharziasis) in man.

This rare subset of eight cards, dating back to about 1960, was presented in chocolate bars and chocolate products from Coop & Bègles (Gironde) in France. The 2¾” x 2” thin cards constitute a subset featuring microscopes as part of a larger album collection called Our Universe. The instruments depicted include a nineteenth century monocular light microscope, a binocular microscope, a photomicrographic apparatus, and an electron microscope. There is also a Crookes X-ray tube, and microscopical images of algal volvocales, hepatic cells, and butterfly scales.

This interesting set of six rare cards from the early 1950s was issued by Lavazza Coffee (Italy) in complete sets after collecting tokens issued with the company’s products. The 4-1/4” x 2-11/16” cards, with descriptive text in Italian, constitute Set 156 depicting various cultivated plant diseases. The cards show the entire plant, with inset illustration of the microscopic causative agent of the plant diseases.