The Illumination System of the Nikon S Series L-Ke Microscope

The reason for this short article is the recent acquisition of a Nikon S series microscope. Initially, my aim was to clean the stand and get it working, for subsequent supply to a youngster to foster an interest in microscopic life. However, it soon became a more intriguing project.

The S series microscopes were produced by Nikon over quite a long period over the 1960s and the 1970s. Though they are probably more widespread in the US and other countries than here in the UK, there is no doubt that they were high-quality, well-made instruments that have stood the test of time. Because of their relative scarcity to instruments from British manufacturers such as Vickers, Beck, and Watson, or indeed continental ones such as Zeiss, Leitz, Wild and Reichert, I suspect that many of us think of them all being the same model; however, a little reading around has soon convinced me that this is not the case.

Indeed, it seems that my stand is not in fact an S series, as such, being designated as Lke. According to a scan of a Nikon catalog, the S range comprised the S-Cb, S-Ke and SKt. It is the S-Ke that has the same type of base as mine, (the ‘Ke’ base) which is shown in the illustration below. This is a little deeper than some of the other bases and has a lever with three positions (Figure 1). More on this later.

According to Nikon; “this ‘Ke’ base houses a complete Koehler illuminating and optical system, making the most efficient use of available light, as only the area under inspection is illuminated. Glare, flare and halo effects are reduced to a minimum. A built-in base turret with auxiliary condenser lenses to adjust the illumination for low, medium and high power objectives is one of the features that makes it an ideal microscope for both visual and photomicrographic applications.”

So, let us see what this system involves.

As you can see, the lever has three positions; L, M and H for Low, Medium and High powers respectively (Figure 2). In this context, a X4 is Low, X10 Medium and X40 and above High power. The graduated knurled wheel that can be seen is the control for the field diaphragm. With the base removed, as shown in Figure 3, we can see what is moved into/out of place when the lever is altered.

When the lever is used, it turns a toothed wheel which rotates a bracket that houses three lenses, B, C and D as labelled below. The light from the lamp housing, which has a collector lens, also passes through quite a thick convex lens (A) before hitting the 45 degree mirror which directs the light up through a thin glass window and the field diaphragm towards the substage condenser.

The situation shown in Figure 3 is for the Low setting, and in this position the only additional object in the pathway is a thin diffuser lens (B). This seems only mildly frosted, being very translucent.

In the M position, none of the extra elements is in the light path whatsoever. That is, neither lens (B) nor lens (C) on the rotating bracket is in the light path; the light from the source goes directly through fixed lens (A) to the mirror, where it is relected up through the field diaphragm and the plane glass dust cover, to the substage condenser.

In the H position (Figure 4), there are two of the lenses in the light pathway. Close to the convex lens (A) is a quite thick lens (C) and also the rather small lens (D) which swings into place just underneath the field diaphragm.

In the M and H positions, the lamp filament can easily be brought to a focus in the plane of the aperture diaphragm using the adjustment controls in the lamp housing. This is achieved by moving the filament backwards and forwards in relation to the collector lens. In the H position, the filament image is much larger, and thus able to fill the aperture of such a lens. That it is smaller in the M position merely allows greater efficiency and less wasted light that could cause problems with disturbing reflections in the various internal walls of the microscope. Furthermore, if a phase telescope is used to view the back focal plane of the objective, it can be seen that the H and M settings do give a filament of an appropriate size to fill this plane fully.

It is testament to the quality of manufacture that the base is so well made, including the cover, which is held by six screws altogether, and the lip is recessed to give what is almost a seal. Consequently, the optics inside were very clean indeed, not really requiring cleaning. Indeed, the mirror itself was very clear, and above this is a perfectly flat glass window immediately above the field iris. 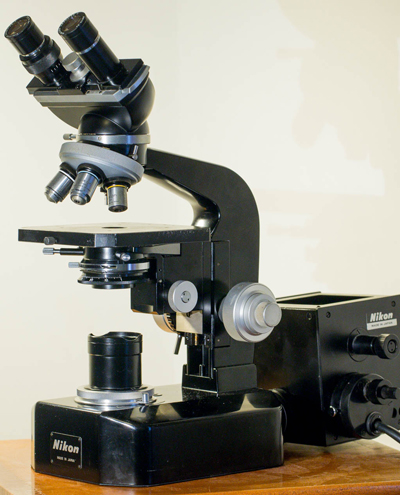 I should like to thank John Gustav Delly for his assistance in producing this article. He was kind enough to provide much help to me in understanding this instrument and in encouraging my enjoyment of it.