Duck eggs are characteristically different based on the species of duck as well as the time of laying. Eggs at the beginning and end of a laying period are often different weights than those in the middle of the laying period (Kennamer 484). These differences seem to be confined to the interior parts of the egg and not the shell. The shell consists mainly of calcium carbonate, CaCO3, which is known as calcite when crystalline. As the components of an egg are traveling through the reproductive system of a bird, they begin to form different layers of protection. Just before producing the outer shell, the egg is exposed to a lot of salt and water. Then the outside of the egg calcifies and becomes the hard eggshell made of calcium carbonate (Latour 1). Characterization using polarized light microscopy (PLM), Fourier transform infrared spectroscopy (FTIR), and Raman will help identify the elemental composition. Scanning electron microscopy (SEM) provides magnified structural images of the exterior and interior surfaces of the shell.

The mallard duck eggshell is off-white in color, with some brown specks and blotches. In transmitted light, the shell is about 75 percent transparent; the rest is darker and opaque. The crushed shell has an irregular morphology not made up of very crystalline particles, but some appear to be equant and two refractive indices can be found for these: the low refractive index is between 1.5160 and 1.5180, and the high refractive index is approximately 1.6400. All of the particles appear to be anisotropic. The particles with complete extinction are symmetrical with a 45° extinction angle. Other particles show incomplete extinction, both undulose and polycrystalline. A moderate-to-high birefringence was measured, and the particles are characteristic of calcium carbonate; specifically, calcite; however, the refractive indices appear to be slightly higher than the references. An interference figure was not found because only some of the particles were crystalline and were not in the proper orientation for interference figures.

When placed under narrow UV light (360 – 370 nm), there was pale blue fluorescence on all of the crushed particles.

Phenolphthalein solution was added to the eggshell to look for a color change. According to test 701 in a supplement from the Fifth Edition of The Merck Index, if calcite was present, the solution should have changed from colorless to red (Merck 675). The solution was made using a 1:1 ratio of deionized water to 95 percent ethanol. Five milliliters of each was mixed together and then 0.05 g of phenolphthalein powder was added to the mixture. Three drops of the solution were placed in a spot plate that contained crushed eggshell. The solution remained colorless for about 45 minutes before changing to a light red/pink shade. This test is positive for the presence of calcite or dolomite. Other instrumentation confirms the presence of calcium carbonate and this confirms that at least some of it has taken the crystalline form of calcite.

The Mohs hardness is different between the outside and inside of the shell. The interior surface of the shell registers a hardness between 2.0 and 3.0, which is characteristic of calcite. The exterior surface has a greater hardness that can be measured between 3.5 and 4.0, but is closer to 4.0. The duck beak bone is composed of a “poorly crystalline apatite,” and apatite has a Mohs hardness of 5.0 (Kim 454). This would allow it to break through the entire egg during hatching. The interior surface is slightly softer, which would allow an easier start to the hatching process for a duckling.

Figure P-1 shows the crushed eggshell in plane polarized light at 400X magnification, followed by Figure P-2 in the same field of view between fully crossed polarizers. Figures P-3 and P-4 are a new field of view, and represent the fully crossed polarizers view as well as the view when a red 1 compensator has been inserted into the microscope. Figure P-5 is another field of view for plane polarized light at 200X magnification. Figure P-6 is the same field of view as Figure P-5, but this time it is with reflected light, which was used to see the color of the opaque particles; they are white, but appear blue in this image due to the shadows from the objective.

HCL Effervescence Test for Carbonates in a Spot Plate:
Acquire an eggshell and grind it using a mortar and pestle. Using a micro spatula, transfer some of the crushed eggshell into the well of a spot plate. The dry eggshell can be seen in Figure P-7. Add 3–5 drops of 1M HCl into the well occupied by the crushed eggshell. Bubbles will appear almost immediately as the eggshell begins to effervesce (Figure P-8). Images can be taken by attaching a camera to a stereomicroscope. When the effervescence is complete, there will be residual bubbles throughout the well. This reaction gives a positive confirmation of the presence of carbonate.

HCL Effervescence Test for Carbonates on a Microscope Slide:
Acquire an eggshell and grind it using a mortar and pestle. Add about three drops of deionized water onto a microscope slide. Using a micro spatula, transfer some of the crushed eggshell into the drops of water, being careful not to overload the sample. Place a cover glass over the water and sample. Place the slide on a polarized light microscope to view the reaction.

Obtain a micropipette and fill it with 1M HCl. Hold a Kimwipe® on one side of the cover glass and the pipet on the other. Slowly wick out the water from beneath the cover glass using the Kimwipe, while slowly adding the HCl to the other side of the slide. This will cause the water to be pulled out and replaced with HCl without moving the eggshell particles, and will dilute the HCl slightly. Now the effervescence can be viewed through the lens and captured with a camera. The HCl can be seen moving across the sample slowly and reacting with each particle as they come in contact.

The exterior surface, interior surface, and cross-section of the eggshell were examined. Images were taken in secondary electron mode with an accelerating voltage of 5kV. Larger accelerating voltages and long times under the electron beam caused charging on the edges and damage to the samples. During the elemental analysis, the sample was left uncoated to avoid any interfering elements. Once this was complete, the samples were coated with gold-palladium. This allowed the SEM to be used at greater magnifications to take structural images of the sample. The coating allowed for better resolution and more characteristics photographed, while protecting the sample from burning or charging in the instrument.

Figures S-101 and S-102 illustrate the cross-section of the egg shell at different magnifications. As the magnification is increased, small air pockets can be seen within the shell. The exterior part of the shell is on the left and the interior is on the right. Figures S-103, S-104, S-105, and S-106 are images of the interior surface of the shell at different points and magnification. The surface structure of the shell is an intricately woven pattern of material surrounding air pockets and pores. Figures S-107 and S-108 were taken from the exterior surface of the eggshell. This surface did not have the same texture or intricate weaving, and it cracked under the electron beam very quickly. Crushed eggshell was also looked at, but there were no distinct characteristics or crystalline structures found.

There is a very strong peak that is fairly broad at 1427 cm-1. There are additional smaller peaks at 2512, 1796, 876, and 713 cm-1. These four peaks together in correlation with the larger, broad peak are representative of calcium carbonate or calcite when crystalline. 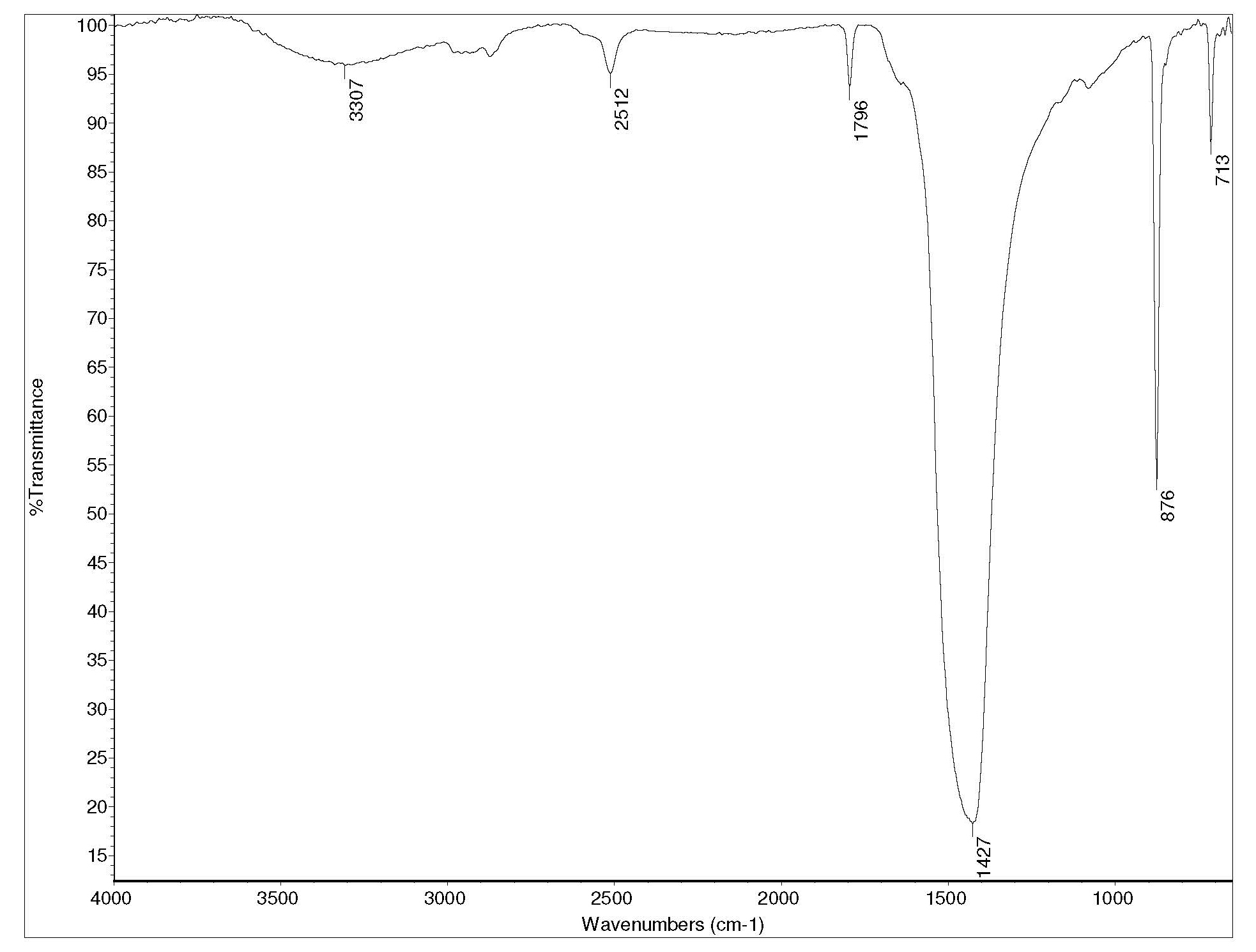