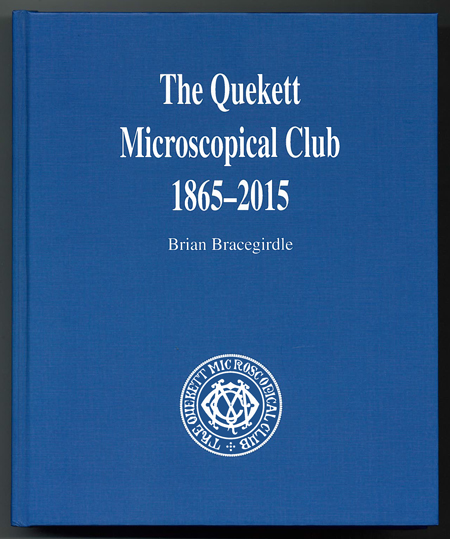 The Club’s website describes the volume this way: “The book celebrates 150 years of a Club for which, the author says, a ‘huge amount of goodwill and actual affection [is] felt for the [Club] by most of its members.’ It reveals some fascinating details of past activities, a sweep of social history and remarkably readable information about the Club’s current involvement in microscopy around the country and beyond.” …but it is so much more than that.

We have reviewed the two most recent of Bracegirdle’s publications on this website—the most recent being his 2010 A History of Photography with the Light Microscope. Bracegirdle told everyone that was to be his last book, but President Phil Greaves gently reminded him that 2015 would be the 150th Anniversary of the birth of the Quekett. This thought was left to linger until Bracegirdle came to understand that he was to be its natural author. When Brian Bracegirdle died this last 16 December 2015, aged 82 years, many of us thought the Club history would never be finished, but, as it turns out, Brian did, in fact, finish the writing and it was soon announced that the book would be available in April 2016.

The book starts out with a Preface dated November 2015, the month before Brian died. Here he explains, amongst other things, the book’s layout and formatting in the same manner that he used to do when he was Editor of the Club’s Journal. In the Acknowledgements, Brian thanks two special people, his wife Patricia and Steve Gill. He also acknowledges Hobbs, the Printer in Totton, near Southampton, who produced his last book, and who have been producing the Club journal for some years.

There follow ten chapters, seven appendices, an index of names, and an index of subjects. Chapter One, Introduction, explains the origin and mission of the organization, founded in 1865, was to cater to London-based users of the microscope who were “perhaps too modest to seek membership of the Microscopical Society of London. That somewhat august body had existed since 1839, and would shortly become even more prestigious in 1866, when it became The Royal Microscopical Society.” The new Club was suggested by one of the amateur microscopists, and other small groups of men already holding regular meetings joined in. John Thomas Quekett FRS, Professor of Histology, Conservator of the Hunterian Museum at the Royal College of Surgeons, and author of A Practical Treatise on the Use of the Microscope (1848, 1852, 1855) had died at age 46 a few years before, and had been well-remembered by some closely concerned in setting up the new Club, and it was proposed that his name be used for the new organization. The existing histories of the Club are described, and here, also, Brian includes a section called “A special Club?” in which he describes the special nature of this organization; namely, the actual affection felt for the Quekett by its members, many of whom devote large parts of their lives to furthering the aims of the Club, and revel in their membership. Brian describes how he has been a member of a lot of societies and institutions in his time, but none for which he has felt affection, as for this one. This first chapter concludes with a list of abbreviations used in the text, a comment on the illustrations, and a list of references.

Chapter Two, the beginnings of the Club in 1865, starts with a Preamble setting the historical tone of the time, including the American Civil War, Pasteur’s discovery of what would come to be called pasteurization, the first dry battery, Kekulé’s concept of the benzene ring, Lister’s use of phenol to create antiseptic surgery, and Gregor Mendel’s work on genetics. May-June 1865 was when the original suggestion to establish a new Club was made in Mr. W. Gibson’s letter in Science-Gossip for 1 May 1865. M.C. Cooke, in his 1899 recollections, thought that it was Richard Beck who suggested the name. There are other suggestions for the origin of the name, and the author describes them all. Illustrations here are of the Meetings Minute Book dated 1865. Portraits in this chapter include those of Edwin Lankester, Peter le Neve Foster, Mordecai Cubitt Cooke, and William Witham Bywater. Thirteen References conclude this chapter.

Chapter Three describes the first volume of the Quekett Journal, together with illustrations of the front and rear, and inside and outside covers, the front and rear covers of No.2, the title page of volume 1, and two plates from volume 1.

Chapter Four, On to 1880, starts with a Preamble giving a brief description of world events and inventions, including the Franco-Prussian War, the opening of the Suez Canal, the invention of dynamite, the invention of the telephone and phonograph, and the formulation of the Periodic Table by Mendeleev. In 1866, the Club had 236 members. Here are descriptions of annual general meetings, papers read, and Club meetings and excursions, accompanied by appropriate illustrations. In this period, Richard Beck dies; a slide cabinet of microscope slide preparations is established; there are annual soireés and practical classes; the first Honorary Members are elected; and there is the development of the Club library.

Chapter Five, 1881-1910 lists and illustrates the Presidents and Honorary Members during this period. There is great progress with the Journal, and reports of meetings, excursions, soireés, special exhibition meetings, and demonstration meetings.

Chapter Six, 1911-1930, continues reporting on meetings, membership, and the microscope slide collection, but there is also here a section dedicated to World War I and the Club. In 1918, lady members were admitted.

Chapter Seven, 1931-1950, again lists all the Presidents of the Club, describes the membership, slide collection, and journal. This is also the period of World War II. The programs of the Club are described for the period, together with copious illustrations of all.

Chapter Eight, 1951-1970, continues updating the Club’s activities, publications, meetings, and exhibitions, again illustrated with many photographs. In 1965, the Club celebrated its Centenary, and coverage of that event is extensive.

Chapter Nine, 1971-1990, continues coverage as before in all areas of these decades, and includes the introduction of the first issue of the Microscopy Bulletin (November 1982).

Chapter Ten, 1991-2015, summarizes the last twenty-five years of the Club, including the 150th Anniversary Year. The Journal saw its first use of color in 2006. Meetings from 2006 to the present are shown through color photographs in this chapter. The Bulletin begins to be printed in color, and the Club website is launched. There were a number of notable bequests to the Club during this period, including that of Geoffrey Williams Owen (1931-2010) who died leaving his estate of the approximately £ 1.2 million to the Club as a trust fund. The author concludes this final chapter by noting, as he did at the beginning of the book, that the “most astonishing aspect of the Club throughout its history is the unique strong feeling of real affection felt for it by many of its members. The Owen bequest of 2010 is clearly the most telling example of this, and affection for the Quekett is certainly the reason why I personally have spent so much of my time in service for over four decades.”

Appendix One lists the Presidents of the Quekett Microscopical Club 1865-2015.

Appendix Three is devoted to a Publication History of the Quekett Journal, which, unfortunately, had three different titles in its forty-two volumes, and its first title was issued in four series!

Appendix Four is a Publication History of the Newsletters 1972-1982.

Appendix Five is a Publication History of the Club Bulletin 1983-2015.

Appendix Seven contains the Portraits of Club members 1866-2015 — both individual and group photographs.

This reviewer has been a proud member of the Quekett Microscopical Club, and a contributor to its Journal for over half a century. I can personally attest to the affection for the Club, its members, and its publications. Fifty years ago, when I left chemistry teaching to transition into the career of professional microscopist, I found myself in the presence of complete runs of the Quekett Journal and the Journal of the Royal Microscopical Society. I decided to read both simultaneously for like years from beginning to end so as to grow up with the art and science of microscopy, so to speak. I did it; it took me eight years. The character of the Quekett, as described by Brian, is absolutely evident throughout the years of the Journal, as are the personalities of the members. I have a complete run of the Quekett publications in my personal library, and have initiated a second reading. When I learned of Brian’s History of The Quekett Microscopical Club being available, I immediately ordered a copy. Two days later a copy arrived, but it could not have been the one I ordered. With the book was a letter from Phil Greaves, Editor of the Quekett Journal of Microscopy explaining that from Brian’s notes left before he died, it was his specific wish that I receive one of his “author’s copies” … and there is an indication of the measure of the man. It is an honor and a great pleasure for me to highly recommend Brian Bracegirdle’s History of The Quekett Microscopical Club, and I urge readers to go to the Quekett website to consider membership in this unique, outstanding, and world-renowned Club.

I can't wait to order my copy. Thank you, John.