The colorful illustrations on the front cover of this book summarize a few of the physical and chemical methods that enable one to identify or distinguish metals and alloys, and determine their composition on a semi-quantitative basis, especially when in the field, or where there is no laboratory equipped with high-cost instrumentation. The front-cover illustrations depict microchemical spot tests, flame tests, and spark tests. 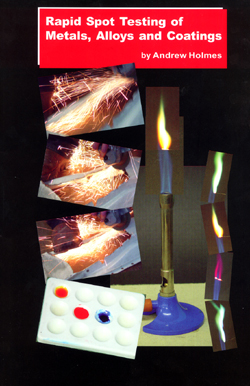 All of the tests described only take a minute or two to perform. In addition to a large range of chemical spot tests using both simple acids and more complex organic reagents, flame tests, and use of a grinding wheel to study the color and form of the sparks emitted, the tests include density, color, magnetic properties, and electrography. Flow charts and logic schemes guide users through test sequences. Appendices describe the reagents used, and list sources of further information and supplies.

More specifically, the genesis of this book stems from an article published in 1999 on spot tests for the metal finisher, which appeared in metal finishing trade publications. In preparing the article, the author noticed how scattered and, in some cases, obscure the published sources of information were – microscopists and microchemists who value these kinds of tests are already aware of this situation. He also found that many of the original sources of useful tests were out of print – again, microscopists and microchemists share this observation. These were sufficient reasons to persuade the author to compile this text.

Chapter 3 is devoted entirely to identifications using organic reagents. Chapter 4 discusses Differentiation of Alloy Groupings. This is a very useful chapter for home shop machinists as well, because it describes rapid ways of differentiating aluminum and its alloys, high-magnesium alloys, nickel alloys, copper-containing alloys, titanium alloys, and, of course, the various steels.

Chapter 5 describes the Identification of Metals by Electrography. This is a relatively simple, and very valuable method that is not commonly known by microscopists. I strongly recommend reading W.S. Berl’s contribution on the subject as it appears in Volume 2 (pp. 155-218) of Physical Methods in Chemical Analysis (Academic Press, 1951).

Microchemical tests have been used for about 200 years now, and they are just as useful today as they have been throughout the last two centuries. I, for one, am delighted to welcome this new offering to the books on rapid spot testing of metals and alloys, and look forward to recommending this text when I prepare my updated, continuing, on-line version of the literature of microchemistry for the microscopist [The Microchemical Bench: Part 6. The Literature of Classical Microchemistry, The Microscope 47:1, pp. 13-28 (1999)]. I just wish this book was offered in hardcover. I will, of course, have my copy hardbound, because a book such as this will be used frequently. Microscopists and microchemists will find this book a useful addition to their spot-tests library, but it will also be of value to scrap-metal handlers, those with home shops, trade schools; indeed, for anyone handling or dealing with metals of unknown composition and provenance.