It was Wednesday, May 20, 1896 at a regular meeting of the Royal Microscopical Society that Mr. E. M. Nelson read a paper by Mr. Julius H. Rheinberg titled, “On an Addition to the Methods of Microscopical Research by a New Way of Optically Producing Colour Contrast Between an Object and its Background, or Between Definite Parts of the Object Itself.” It was not an entirely new idea, others had demonstrated the use of color, but Rheinberg was the first to take a serious, scientific approach using Abbe’s diffraction theory, combined with the known characteristics of darkground (darkfield) to introduce a novel method that had significant practical use in enhancing contrast, superimposed on resolution, to benefit all branches of microscopical investigation, especially living specimens and fresh tissue.

The Zeiss company picked up the idea. (Some collaboration with Rheinberg had already occurred.) In time, products incorporating Rheinberg illumination were introduced, and Zeiss even made a quite elaborate Rheinberg condenser system, the Mikropolychromar, that is highly prized by collectors today. Rheinberg illumination held a prominent place alongside darkfield lighting schemes until the introduction of phase contrast which, in turn, yielded its place on center stage to the emergence of differential interference contrast (DIC). Today, among light microscopists who do not utilize more elaborate methods such as confocal imaging, most advanced research microscopes are equipped with phase contrast and/or DIC, perhaps a darkfield stop in the phase condenser, and Rheinberg’s methods have largely passed from novel to novelty, no longer being taken seriously by the professional community.

Julius Rheinberg had a great deal more in mind than just pretty colors and much of the scientific relationship to optical theory that formed the foundation of his research has been forgotten: many professionals have forgotten that there was serious optical theory undergirding the technique and many hobbyists are unaware that it was ever more than a great way to make beautiful microscopical images.

In light microscopy, in any optical system for that matter, the trade-off has always been between resolution and contrast which seem irritatingly at odds with each other. Open the aperture diaphragm of the condenser to maximize resolution, and contrast goes away; some subjects disappear entirely. Close the aperture diaphragm to maximize contrast, and resolution suffers. Use darkfield and the gross structure of the specimen disappears into a glowing line drawing, rich in highlights, lacking depth. Bring in phase contrast and those same highlights are now somewhat obscured by glowing halos. What can preserve the image of the gross structure, the highest resolution possible for the given magnification, and bring the highlights of the image into stark contrast overlaid upon the premium resolution? Julius Rheinberg would have said, “Optical color contrast staining!”

The principal theory behind Rheinberg illumination, as he expressed it, is the ability to transilluminate the specimen with a central cone of light from the condenser of maximum possible resolution (rather than blocking it out entirely with a darkfield stop) while at the same time highlighting the finer details of the specimen with a contrasting color. This contrasting illumination is introduced obliquely from beyond the limits of the central cone and does not enter the objective directly; rather, it uses diffraction in the same way as darkfield to illuminate the finer structures. Both of the images are simultaneously produced in the objective and presented for viewing, or photography, as a single, high resolution image which is full of rich contrast. Rheinberg stated that it was almost like having two objectives in one. Furthermore, he used monochromatic light (all colored filters are to some extent monochromatic, but some more so than others) to eliminate chromatic aberration (not quite so important with modern apochromatic objectives) thus improving focal precision, and strong complementary colors to maximize contrast.

It is widely held that Rheinberg illumination is limited to low magnification objectives, much the same as darkfield, largely because it is difficult to obtain a discrete concentric border between the central cone and the peripheral contribution as the aperture of higher numerical aperture objectives utilizes nearly the entire diameter of the condenser. Rheinberg had some rather interesting ways of achieving higher magnification color
contrast, including placing his colored discs at the back focal plane of the objective itself, or even in between the elements of the objective; not only is this impractical, it would give many owners of high-end objectives heart failure just contemplating this approach. What could make this illumination scheme once again practical, easily adapted to any microscope, and useful for high power magnification, wide aperture imaging?

In this paper I introduce a dual illumination system that allows the condenser to provide the central background color exclusively while a special fiber optic illuminator in the stage provides a nearly horizontal oblique contribution of the contrasting color 360 degrees around the vertical light path. This allows the aperture diaphragm to be opened to its maximum resolution, making it possible to use the highest power/aperture
objectives at their maximum resolution while providing the contrasting illumination from well outside of the objective aperture cone. Furthermore, by employing the use of a continuous filter monochromator in the central lighting system, monochromatic light in a variety of colors can be selected quickly within the visible range for either system. While the prototypes are admittedly cumbersome and have a fairly large footprint, the concepts can be transferred easily to better designed and far more compact lighting systems employing today’s advantages of cooler LED systems and digital filters or monochromators. A research microscope so equipped could return the advantages of high magnification color contrast to the end user that, with the turn of a dial, could make Rheinberg illumination as easy to employ as phase contrast or DIC, thus restoring a valuable and complementary method of contrast illumination to the multi-faceted field of light microscopy.

A special circular shim was used to elevate the condenser so that it would fit into the fiber optic ring and come close enough to the necessarily elevated stage to enable oil immersion to the bottom of the slide while also being appropriately focused.

The normal light path through the Universal base was utilized in the usual fashion and illuminated with a Zeiss 12v 100w halogen lamp. The continuous filter monochromator was mounted in the filter holder of the field condenser as designed by Zeiss. In every other respect the Zeiss Universal microscope was set up in the normal way and attention was consistently paid to properly adjusted Köhler illumination.

The secondary oblique source included a custom made in-line filter holder and a typical 20v 150w halogen lamp source with rheostat control. Included images illustrate the set-up. Also included are photographs made using the dual illumination stage demonstrating the contribution of each source against a ground glass background. The first two illustrations represent the circumferential oblique illuminator and the 1.4 numerical aperture condenser wide open. The third image illustrates the combined result of both illuminators. The fine black line seen in the red and the combined illustrations is the top of the slide.

The technique employed in acquiring the images utilized a Zeiss monochromator continuous filter over the field diaphragm and colored glass filters placed in the in-line holder for the oblique illuminator. The use of a monochromator allowed for rapid scanning of various color combinations: a colored glass filter was placed in the oblique illuminator and the monochromator was moved in one direction until good contrasting colors were identified. Köhler illumination was then verified and fine-tuned, and the field diaphragm was opened just slightly larger than the field of view.

Once good combinations of contrasting colors were identified, the relative intensities of the contributing lamp sources were adjusted until the image achieved its best contrast. Most exposures lasted from 4-30 seconds due, in part, to the relatively low intensity of the transmitted illumination compared to the oblique source and also to the fact that long exposures in photomicrography tend to produce higher quality images with greater detail and sharpness.

Limited post-processing of the images was done, but adjustments were made to exposure (minimal), contrast (minimal), and sharpness/noise reduction, as needed, using iPhoto on an Apple Mac Book Pro. Images were recorded in high resolution JPEG mode on a Sony a55 SLT.

I have selected but a few of the various images made during this trial sufficient to demonstrate the ability to record high contrast Rheinberg-type images using high magnification/wide aperture objectives. In the Addendum I have included some images made in the early stages of developing this prototype which illustrate the application of the technique to wet mounts of live Protista and phase contrast.

In the following images, all microscope and camera settings remain the same (except shutter speed). The differences are the illumination intensity and monochromatic wavelength from each lamp source and the exposure time. “T” equals the transmitted source and the central wavelength in nanometers is reported. “O” equals the oblique source and the approximate wavelength of the colored glass filters. “E” equals the exposure time required to capture the image. “A” equals the relative aperture setting in the condenser, e.g., 70/30 would be 70% open. The data for the second diatom (T=505nm@3.9v, O=650nm, E=30s+2/3comp, A=70/30) would read: the transmitted light was 505 nanometers with the transformer set at 3.9 volts, the oblique light was approximately 650 nanometers, the exposure was 30 seconds plus 2/3 exposure compensation on the light meter, the condenser aperture was set 70% open. In all cases the oblique light source was set at maximum intensity. Diatom subjects are from Klaus Kemp prepared slides, 8-form and 50-form selections. 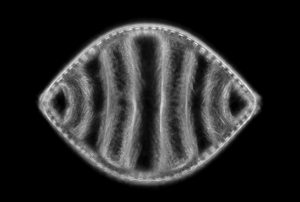 I made several observations during the image acquisition phase:

Rheinberg’s original concept of contrasting color illumination has merit for revival as an additional contrast method in contemporary light microscopy. It is particularly helpful in creating useful and informative contrast with nearly transparent specimens, as he envisioned. It is also possible to apply the technique to high magnification, high aperture objectives by using the method demonstrated in this study.

Given the advance of LED illumination for microscopy I can see the development of a stage that incorporates a circumferential, oblique fiber optic illuminator much better tuned to the field of view than the crude prototype utilized in this study. Much like a microscope now equipped with both incident and transmitted illumination, this third option would allow oblique transmitted illumination. Add an electronic filter system that allows software manipulation of the wavelength of the light supplied by the LEDs, or even monochromators currently available, and Rheinberg’s concept becomes a reality available to the modern microscopist at the flick of a switch and the turning of a few dials.

Rheinberg, J. “On an Addition to the Methods of Microscopical Research, by a New Way of Optically Producing Colour-Contrast Between an Object and its Background, or Between Definite Parts of the Object Itself.” Journal of the Royal Microscopical Society, Volume 16, Issue 4, Bell, F. J., Editor, London, England. August 1896. pp.373-388. Google Digitized Copy, 2011.

The author is particularly indebted to Mr. John Dunford, a friend and machinist akin to the old German masters. He is able to listen to me describe my imagination and turn the description into reality in his shop with all the precision required.

For information on how to obtain a custom stage for your own research (a limited number of prototypes and raw materials are available) or for questions related to this article, please contact Paul Martin via e-mail: prmartin@mc.net. Kindly use the subject line “Rheinberg Article” so your correspondence does not get lost or caught in a spam trap. Letters may be addressed to Paul R. Martin, P.O. Box 1352, McHenry, IL 60051.