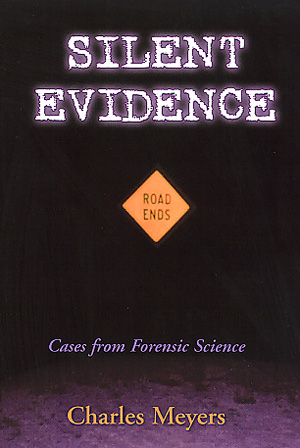 I first met Charlie when I was an intern, before he was the third director of the Michigan State Police Laboratories, following LeRoy Smith (1932-1958) and Wallace VanStratt (1958-1972).  He joined the laboratory as a Trooper in 1956, where he began a career in forensic science that has spanned 50 years (25 years with the Michigan State Police, 12 years with the Florida Department of Law Enforcement, and 15 years as consultant in retirement).  He now catches trout, instead of crooks, near his cabin in Mountain City, Tennessee, and only occasionally has a “look at a case.” Fortunately, readers of this little book will have the opportunity to learn, from a master forensic scientist, exactly how real investigators think through a real crime scene and how the practice of forensic firearms and toolmark identification solves crimes without DNA.

Silent Evidence contains a list of definitions, 14 accounts (chapters) of fascinating real cases, “A Primer on Firearms and Toolmark Identification” as an addendum, 37 illustrations, references, and comment on the “experts” of today.  The names involved with the cases were changed, but readers familiar with the Michigan State Police will recognize the names of former colleagues (first and last names are often switched around here and there).

Characteristic of Charlie, the language throughout the book is plain spoken (only the facts, ma’am) and forthright. Interspersed with police and forensic vernacular, the cases are easy to read and the evidence in each case is easy to understand. As written in the Preface: “The book, for the most part, attempts to let the evidence speak for itself.” Overcoming preconceived opinions, proper crime scene protection, the value of other trace evidence (from fingerprints, footwear and tire impressions, through documents, to soil evidence), the use of crime scene reconstruction, and, of course, striation matching through comparison microscopy are emphasized.  Many cases also illustrate how simple things done correctly solve crimes.  A remarkable shovel mark identified in one case illustrates a master’s methods; as far as I know, it had not been done before and has not been done again in the last forty years.  It is clear as a bell that all that ever mattered to Charlie was good honest science, mixed with the necessary patience and persistence to see that the right guy goes to jail by letting the physical evidence speak for itself.

Silent Evidence would be useful reading for every forensic scientist interested in more than his own narrow specialty, and useful to new firearms and toolmark examiners before they ever see their first case.  If you know Charlie, you will want to send him a note of thanks after you read his book.