A rare and expensive dye of antiquity, Tyrian purple, extracted from a marine mollusk, was used nearly exclusively by kings, noblemen, judges, and high-ranking officials. Characterization by FTIR and Raman spectroscopy provides a basis for future comparison of samples of unknown composition. FTIR and Raman spectra of both commercially available dye and dye synthesized through variations of a published method were recorded. The spectra both matched each other and other published spectra.

One of the most prized and well-known of the ancient dyes is Tyrian purple, alternatively known as Royal purple or Imperial purple. In nature the dye is obtained exclusively from the hypobranchial gland of various species of marine mollusks, most notably Murex brandaris (1). Not only is the process of removing and processing the gland, located in a clef near the head, painstaking, but over 8,000 large mollusks are needed for a single milliliter of dye. This made the dye both rare and costly. Only kings, noblemen, high-ranking church officials, and judges were able to afford it, and the Roman Republic had strict regulations, based on a person’s rank in the government and social status, on how much of this purple an article of clothing could contain; imitations were strictly prohibited (2). Restrictions tightened when the emperor came to rule.

The dye had spread to Europe along the silk trade route from the eastern Mediterranean coast. Although the exact date and place where Tyrian purple originated remains an archeological puzzle. Production was centered in the city of Tyre, in present day Lebanon, and this is where tradition places both the origin of the dye and the subsequent industry. The city itself developed in the late Bronze Age, possibly as late at 1100 B.C.E. (3). In the same region, Sarepta (now Sarafand, Lebanon) possibly showed signs of dye industry at the earlier date of 1400 B.C.E. (3, 4). Other evidence suggests that the Minoans on the Greek island of Crete developed the dye industry as early as 1750 B.C.E. (5). The difficulty in determining the precise origins lies in that the mollusks are also edible. There are remnants of breeding tanks in the bays of a number of cities. Whether these tanks were used to breed the mollusks for consumption or to advance the dye industry is still being investigated (5). It is also possible that the tanks may have served both purposes.

As the Roman Empire weakened and other dyes such as lichen purple and madder became more widely available and less expensive, the use of Tyrian purple declined. It ceased as an industry in 1453 with the conquer of Constantinople by the Ottoman Turks (1). With the fall of the Byzantine Empire, so too fell the last remaining state of the Roman Empire, which had existed for nearly fifteen centuries. This would also mark the end of the Middle Ages.

The fame of Tyrian purple lives on in part because of its royal history. But its rarity is not the only reason. The rich, deep color it produces in cloth and its chemical stability are two other reasons. A deep purple color with a hint of black is difficult to obtain since the color depends on three variables: the mollusk species, for how long the gland is dried, and the concentration of the dye on the fabric. This color is therefore the most prized (1, 2). The latter variation is most often reported with silk fabric, the color changing from a pale blue to a deep purple as the dye concentration increases (6). It is thought that this is a result from the van der Waals interaction of the bromine atoms with those in neighboring molecules. Facilitated by the planar nature of the molecule, which therefore allows the bromine atoms to lie closer together, a color more purple than blue results (6). This achieves a higher concentration on the fabric than is possible with indigo, which is structurally a non-brominated Tyrian purple. Once on the fabric, the dye is resistant to soap, alkali compounds and degradation from atmospheric oxygen, which means that, unlike indigo, it does not require a fixing agent to preserve the dyed fabric. As a solid, it is insoluble in most organic compounds.

Throughout the Renaissance, the dye was used ever more infrequently. It was not until 1685 that the dye was rediscovered on the shores of the Bristol Channel in England by William Cole (1, 3, 4). He described the precise manner for breaking the shell of Nucella lapillus, Figure 1, as not to damage the hypobranchial gland that contains the chemical precursor of the dye. Exposure to sunlight causes not only a color change through the sequence of cloudy white, light green, deep green, sea green, Watchet blue, purplish red, and finally a deep purple, but also a distinct strong odor that had been likened to garlic (5). Despite his rediscovery of Tyrian purple, there was little renewed interest in its use.

The chemical properties and structure, however, became the subject of many studies. In 1909, the chemical structure of Tyrian purple was determined by the German chemist Paul Friedländer. He processed the hypobrancial glands of the species Murex brandaris first by extracting them and then allowing them to fully develop in the sun (1, 2, 3). After purification, he had obtained 1.4 grams of dye from 12,000 mollusks. Elemental analysis showed an empirical formula of C16H8Br2N2O2. 5-5’- and 6-6’- dibromoindigo compounds were known at the time and the structure of 6-6’-dibromoindigo, Figure 2, was confirmed through organic synthesis. More species of mollusk were tested as the time required to process samples was reduced due to improvements in analytical technique and instrumentation. The same chemical structure was concluded.

Sachs and Kempf were the first to synthesize 6-6’-dibromoindigo. In 1903, they published a reaction that began with 2-nitro-4-aminobenzaldoxime, Figure 3, and lead to 4-bromo-2-nitrobenzaldyde, Figure 4, by diazotization, the replacement of a nitro group by the diazonium ion, a good leaving group, in HBr and NaNO2. The classic Bayer-Drewson indigo synthesis reagents of acetone under basic conditions produced 6-6’-dibromoindigo. Numerous other procedures have been suggested (4) with nearly all of them using 4-bromo-2-nitrobenzaldehyde as the final intermediate and the Bayer-Drewson method to synthesize the product.

Peter Imming, Ingo Imhof, and Matthias Zentgraf are one of the groups to make use of the Bayer-Dewson method and 4-bromo-2-nitrobenzaldehyde in their synthesis of Tyrian purple (7).  They sought to improve on published synthesizes, beginning with 4-methylaniline, in three main ways: increase the yield through the optimization of the reactions, obtain product of analytical purity, and prevent the formation of chloroindigos.  The synthetic pathway they determined is illustrated in Figure 5. 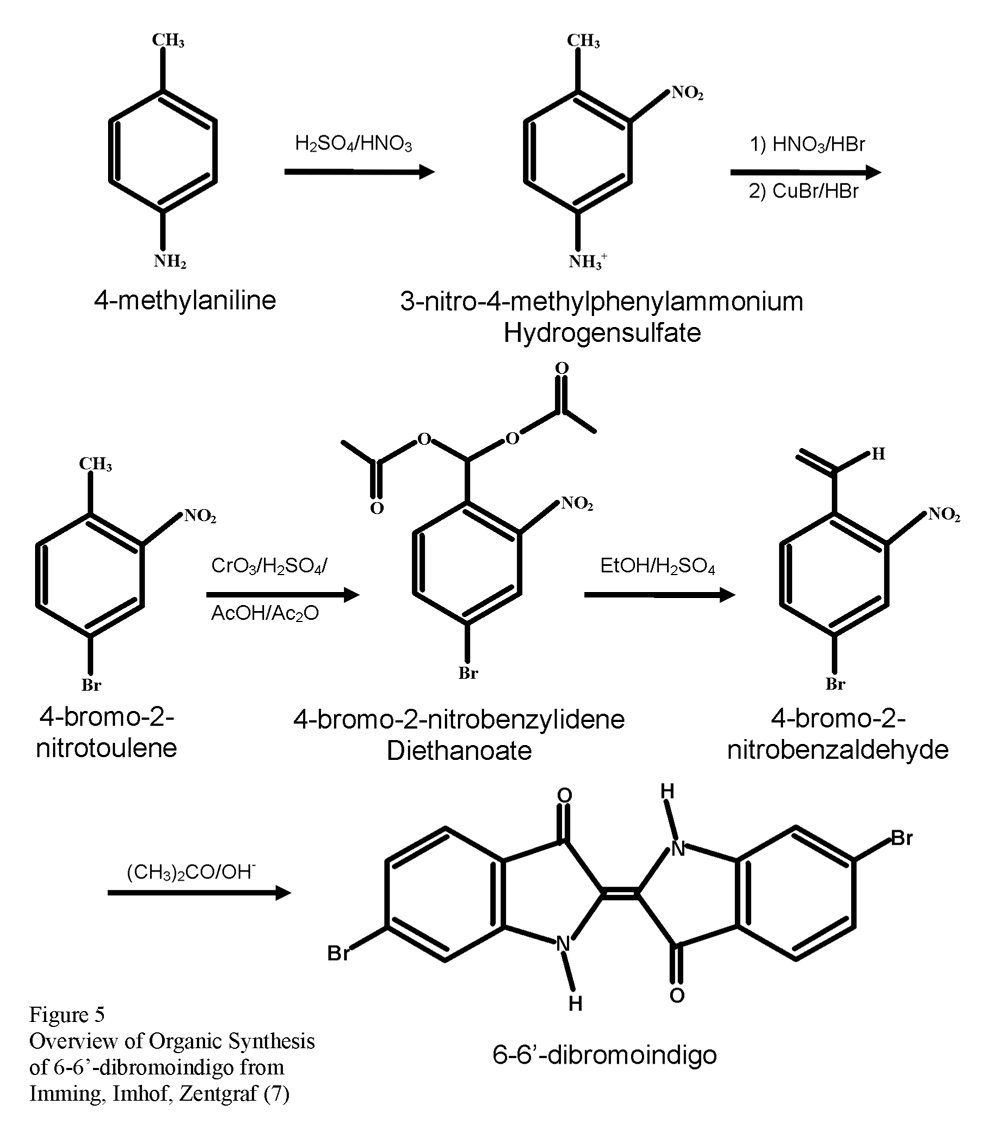 Today, the main use of the dye is for the restoration and analysis of ancient textiles and paintings.  There has been recent interest in indigo derivates for use in medicinal chemistry, mainly indirubin, Figure 6, and tryptanthrin, Figure 7 (7). The earlier has shown promise to facilitate an anti-tumor agent, whereas the latter may help inhibit side effects from antirheumatic drugs (7).  Despite the number of published organic synthesizes, Tyrian purple is still not used to dye fabric or in paintings.  The dye remains expensive due to the cost of the starting material and the low yield of many of the steps in the overall reaction.

Two samples of Tyrian purple were obtained to be compared through infrared, Raman and visible spectroscopy. The first sample was produced in the laboratory through a variation on the synthetic procedure of Imming, Imhof and Zentgraf (7). The laboratory produced sample was synthesized in three steps beginning with the commercially available 2-bromo-4-nitromethylbenzene (Aldrich). The product resulting from this first step, 4-bromo-2-nitrobenzylidene Diethanoate, was recrystallized from ethanol to remove the chromium catalyst. No other variations were made to the published procedure. The commercial source of the dye was also the mollusk source, specifically from Purpura lapillus and was used as received (Kremer pigments, 8).

The two compounds were first analyzed with the complimentary instruments of infrared and Raman to determine their spectral characteristics. Infrared analysis of both dyes showed peaks characteristic of N-H stretching and C=O stretching at 3300 cm-1 and 1630 cm-1, respectively (Figure 8). Comparison with literature showed similar results (4). Analysis with the Raman produced similar agreement. The most prominent peak is the carbon-carbon double bond stretch at 1582 cm-1. Weaker ring stretch and deformation peaks were observed at 1250 cm-1 and 640 cm-1, while the peaks relating to the N-H and C=O stretch are weaker still, at 1360 cm-1 and 1300 cm-1, respectively. Literature values noted the significant carbon-carbon double bond stretch, but do not comment on the other peaks (4, 6).

Visible spectra of both dyes were also obtained through the Raman system.  This was accomplished by removing the notch filter from the instrument and scanning across the visible region of the electromagnetic spectrum.  Sending the white light from the microscope back through the system to the detector resulted in a composite spectrum.  A background was then collected and subtracted from the spectrum.  Both samples absorbed over the 500 to 700 nm range (Figure 10).  The minor inconsistencies in the spectra are more likely due to the mathematical operations performed rather than actual variations between the samples.  Literature data only reports visible spectra results in various solvents and not in the solid state therefore making a direct comparison irrelevant. 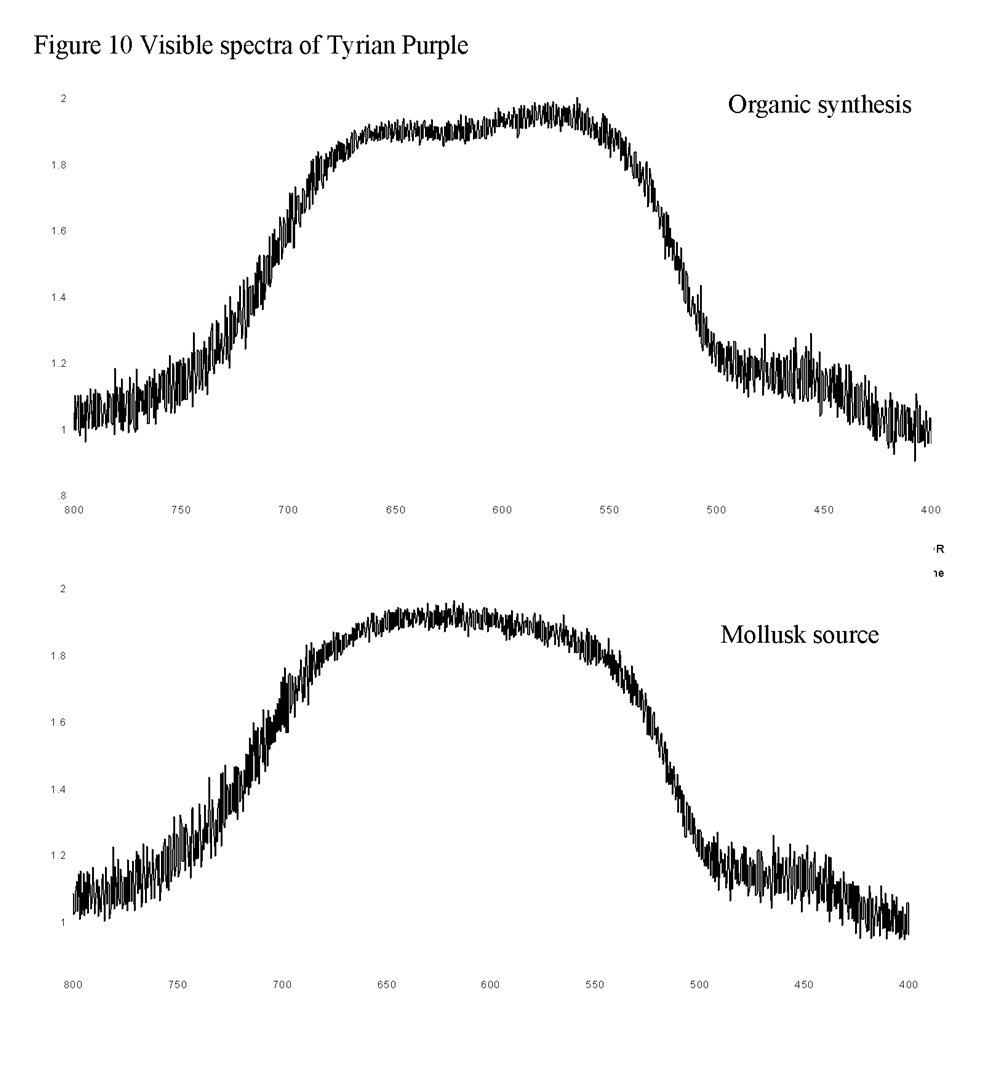 Comparison of the organically synthesized dye with the commercial dye showed matching spectra in the infrared, Raman and visible, which also matched with published spectra of Tyrian purple. This illustrates not only the possibility of achieving nature’s molecules in the laboratory, but also obtaining dyes of analytical quality.

Further in-depth analysis of Tyrian purple requires a good method to fully facilitate the analysis of the minor components of the compound. The results may differ depending on whether the dye was synthesized or acquired from the mollusk. Likewise, variations in the chemical pathway may determine how prevalent the di- and mono- bromonated indigos are and the isomers, if any, present. Furthermore, there may be differences depending on the species of mollusk or where and how the dye was processed. Work with the HPLC has been done (6), but it focused more on the synthesis of the di- and mono- bromonated indigos rather than the analysis of the components of Tyrian purple. Until extensive studies on the relationship of structure to peak in the spectra are accomplished, it is difficult to know if the IR and Raman are sensitive enough to detect the minor components. Solubility problems prevent the use of liquid phase nuclear magnetic resonance (NMR), which is sensitive to substitution patterns. Due to the complex nature of Tyrian purple, it is likely that standards would have to be run on any of these instruments, or the original sample separated into its components. A study of the visible spectra of the various bromoindigos could provide a correlation between bromination pattern and absorption spectra. The solvent chosen may also have an effect on this relationship.

The author would like to thank the following people without whom this project would not have been possible. First and foremost, thanks to Kimberly Lawler-Sagarin, PhD of Elmhurst College who helped with the brainstorming of the project and the laying down the of ground work. Her patience and enthusiasm are much appreciated. The author is also grateful to Eugene N. Losey, PhD, also of Elmhurst College, for acting as tour guide and mentor through the sometimes frustrating, but intriguing world of organic chemistry. This project would never have made it this far were it not for the encouragement of Anna Teetsov and Gretchen Shearer, PhD of McCrone Associates. It is with much gratitude that the author thanks them for their expertise in microscopy and for their guidance through the writing and publishing process. Additionally, the author would like to thank Ken Smith, PhD of McCrone Associates for his help with the spectroscopy instrumentation.