Universal Stage Use on the Olympus BX51-Pol Microscope

The Universal Stage is one of the oldest and most useful accessories in the armamentarium of the polarized-light microscopist.  It is conventionally used to examine thin sections of rocks, minerals, slags, ceramics, and concrete, or grain mounts of minerals and other single phase or concentrates in solid or liquid mount; even single large crystals and gemstones can be examined.

The particle microscopist normally mounts an unknown in a liquid or thermoplastic medium that allows for the changing of the sample’s orientation by applying pressure to the edge of a round coverglass, so as to maneuver the particle into the most favorable position for measuring crystal angles, observing interference figures, etc.  However, when one is looking at a thin section of rock, the minerals comprising the rock are at various, fixed orientations, and not much can be done about it when using a flat stage.  The universal stage is designed to both rotate 360° and to tilt such a thin section 40°-50° through any of several axes.  One of the first polarizing microscopes was built by Amici in 1844, and this microscope had a built-in E/W tilting axis incorporated outside of its inner, concentric movement.  The biggest problem observed when using this instrument was due to refraction of the light at high angles of tilt, but by 1875 Adams solved that problem by adding small concentric hemispheres above and below the crystal.  By the end of the century (1889-1896) Fedorov had designed the prototype of what would be the modern attachment universal stage.  In the next two decades, Max Berek designed an attachable universal stage for Leitz that incorporated a number of improvements, and is the instrument that is in use today.  Over time, 3-axis, 4-axis, and 5-axis universal stages appeared, although the 4-axis version is the one most commonly used.  In addition to the early universal stage made by Fuess, and others, modern versions have been made by Leitz, Zeiss (Oberkochen), Jena (Zeiss Jena), Bausch & Lomb, Cooke, Nikon, the Russian-made LOMO, and copies of the Leitz made in China.  Although no longer made by the major manufacturers, several Leitz and Chinese-made versions have been available on eBay in the last year.

Incentive for Modification of Olympus BX51

The Hooke College of Applied Sciences, a member of The McCrone Group, recently had the opportunity to offer a course of instruction in Universal Stage Methods for the Identification of Crystalline Materials taught by Daniel E. Kile, formerly with the United States Geological Survey, and author of the beautifully-illustrated monograph, The Petrographic Microscope (see online review).  The problem, however, was that the universal stage itself requires considerable space between the microscope stage and the front of the objective; the vast majority of microscopes as currently manufactured do not allow for the required amount of space.  It would be necessary to adapt the College of Microscopy microscopes–Olympus BX51 polarized light microscopes–to accept the Leitz universal stage, which is the model that was to be used in the class.  This was the incentive for preparing the modifications described in this article.  The modifications involved only two tasks; namely, (1) make a riser block to increase the distance between the microscope stage and the objective, and (2) make an adapter plate that would both accept the Leitz universal stage, and attach to existing threaded holes in the Olympus stage.

There is precedent for the use of a riser block:  the Leitz 4-axis universal stage needs so much room above the stage that even a large research-grade microscope like the Leitz Ortholux-Pol requires that the entire body tube be raised by about 18 mm, and secured with a riser block stop.  Also, a commercially available riser block was made for the Zeiss Universal Microscope.  This Zeiss Universal Microscope Riser Block raises the main arm of the Universal microscope 34 mm higher above the base of the instrument.  [Incidentally, although the riser block described in this article raises the body tube above the stage, the Olympus BH2-Pol would require a riser block to raise the main body above the base, in the same way that the Zeiss does.]

Examining the Olympus BX51-Pol, it was decided that the simplest way to acquire the needed extra room above the stage was to simply raise the entire casting that held the observation tube and Bertrand lens unit.  The configuration of the removedcasting immediately suggested the use of a common wood 2”x 4” for the prototype.  Accordingly, measurements were made, and a 5 ½” length of 2”x4” was sawn to be 3” wide, and four ¼” holes were drilled to correspond to the holes already in the casting.  A small elevation in the casting also required that a relief hole be drilled in the wood to accommodate the elevation.

Figure 1 is a photo of the underside of the prototype riser block, showing the relief hole drilled for the elevation in the casting.  In this first version, the four mounting holes are shown lined with metal tubing, but these were dispensed with in the final version.  The finished riser block was painted flat black to match the now-exposed, unfinished lower portion of the casting, and to complement the microscope’s other black accents.

Figure 2 (Download PDF) is an engineering drawing of a proposed production riser block made from 3” x 1 ½” aluminum bar stock, with black anodized finish.  This drawing provides all of the necessary dimensions.

To make up for the added thickness of the riser block, the four normally supplied mounting screws were replaced with four longer screws, #10 – 32 x 2 ½”.

With the riser block finished, the Leitz Universal Stage has to be attached to the Olympus BX51-Pol stage.  On a Leitz polarizing microscope, there are already two drilled and tapped holes in the pol-stage to accommodate the Universal Stage.  These holes are 85 mm apart, and are tapped M3.5 x 0.60, to take the two special U-stage mounting screws that accompany the Universal Stage.  [Note: for those not familiar with screw thread designation, the “M” means that the dimensions are in metric units; the “3.5” means that the thread diameter is 3.5 mm; and the “0.60” refers to the pitch of the thread, i.e. the number of threads per millimeter.]  There are no matching tapped holes 85 mm apart in the Olympus stage; there are, however, several other tapped holes in the Olympus stage toward the perimeter that could serve to attach a metal plate, to which the Leitz U-stage could be mounted.  Accordingly, measurements were taken.  Figure 5 (Download PDF) is an engineering drawing of the proposed adapter plate, eventually to be black anodized.  The adapter plate can be made from 1/16” thick or 3/32” thick aluminum sheet.  If homemade, the sheet aluminum can be bought at a hardware store and the necessary piece can be fabricated using a circle-cutter chucked in a drill press.  [A circle-cutter is like a pilot drill with an outboard arm that carries on its end a cutting tool that can be adjusted for distance along the arm.

In use, the universal stage requires that the central disc insert in the microscope stage be removed; there is a correspondingly large opening in the base of the U-stage.  A 5.83” diameter disc is cut out of the aluminum sheet, and a 2.84” diameter piece is cut out of the center of that.  Two ¼” holes are drilled 120° apart where specified in the engineering drawing; these will allow room for attaching, centering, and adjusting the adapter plate to the Olympus stage.  Then two holes are drilled 85 mm apart where indicated in the engineering drawing.  These holes should be made with a 2.9 mm drill, which is the size needed to tap the two holes M3.5 x 0.60.  That completes the adapter plate, which fastens to the M3.0 x 0.50 tapped holes in the Olympus stage, after the stage is rotated to zero degrees at the vernier, and locked.  The ¼” holes in the adapter plate allow plenty of room for the 3.0 mm diameter threads for centering.  For convenience, knurled thumb screws may be used for attaching the adapter plate to the stage, so a screwdriver is not needed. If the stage is equipped with centering screws, centration of the U-stage can be effected that way.

Alternatively, if the microscopist happens to have a Linkam hot stage, the U-SRP Adapter plate used to attach the hot stage to the Olympus stage may be drilled and tapped to take the U-stage.  Figure 6 (Download PDF) is an engineering drawing of the Linkam U-SRP Adapter.  Figure 7 is a photo of the actual adapter plate, which has two holes drilled 85 mm apart—centered top and bottom in the photo—and tapped M3.5 x 0.60.

Figure 8 shows the Leitz 4-axis Universal Stage mounted on the modified Linkam adapter, using two cheese-head screws and washers; the screws are M3.5 x 0.60, or the mounting screws that accompany the U-stage can be used—with additional washers if the universal stage has a centering base. 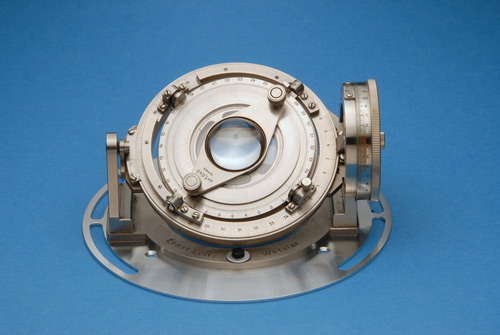 Figure 9 shows the Leitz 4-axis universal stage mounted on its adapter plate, now affixed to the Olympus stage using two knurled thumbscrews M3.0 x 0.50; fiber washers were chosen for smoother sliding during the centering operation.  This completes the U-stage-to-Olympus-stage modification (the microscope stage has been removed from the microscope for clarity).

The entire stage assembly will have to be lowered on its dovetail, using the hex wrench provided with the microscope.  Also, all of the objectives should be removed except for the one in use, because otherwise the Wright acrs will hit the other objectives.  The objective will have to be of the long-working-distance type to be used with the hemispheres.  The older Leitz U-stage objectives can be used even though they are corrected for finite tubelength.

IMPORTANT Optical Considerations: The Olympus BX51 polarized light microscope contains a telan lens in the head to converge the parallel rays from the infinity-corrected objectives. If the older finite tubelength (160 mm, 170 mm) objectives are used on this type of microscope, it is still possible to obtain a focused image of a normal, flat, slide preparation. When using the large, orthoscopic hemisphere on the universal stage, however, an in-focus image of the thin section cannot be obtained, and Olympus long working-distance objectives do not have enough working distance to focus the sample either. The solution to these problems is to simply use the smaller conoscopic hemisphere for orthoscopic observation; then, any of the older finite U-stage objectives can be used as well as any of the Olympus long-working-distance objectives. Not, however, that the stated maginification will not hold.

Using the simple principles outlined here, many other current polarizing microscopes may be similarly modified so as to take advantage of the versatility of the universal stage.

The author thanks Wayne Fetters, Facilities Specialist, McCrone Associates for preparation of the engineering drawings, and executing the final version of the riser block.