The Technique of Mounting Foraminifera

The foraminifera are amoeboid protists. They are the most common marine planktonic and benthic species. The majority of the shells of foraminifera (from Latin foramen, an aperture) have a number of tiny openings throughout their entire surface, so that finely extended feelers or pseudopodia (from Greek pseudo, false, and podia, foot) may protrude in all directions. These marine rhizopods constitute the most important order of this class of life. They have existed from very early geologic time, and their remains have contributed to the formation of present-day rocks.

Most of them live on the bottom of the ocean and seas, and are food for sponges and other creatures. Large numbers, however, live on the surface of the ocean and seas, and their dead shells continually descend to the depths where they form ocean mud, as in the case of “Atlantic ooze.” The globigerina are one of the many classes of marine rhizopods, and are, in reality, a group of foraminifera.

Most of the foraminifera shells are made up of calcareous or chalky matter that the organisms secrete from elements present in the surrounding sea water. Some, however, have shells that are in part calcareous and in part tiny particles of sand. There are also those whose shells are entirely made of sand grains cemented together. The shells are partitioned into many chambers, and many of the shells are in the form of a spiral, like those of the nautilus and ammonite. Generally very difficult to distinguish with the naked eye, they are readily detected with a good pocket lens.

Where to Find Foraminifera

There is no great difficulty in finding samples of these beautiful shells for examination with the microscope. In the sea, you can collect them, and then observe living foraminifera. On the mainland, you can find soils rich with fossil foraminifera on all continents. Look for them on land that in ancient times had been submerged by the sea. Even the sand of the beach may be interesting to observe. In the midst of the grains of sand, you can find tiny shells, snails, and tiny fragments of marine organisms.

It is a wonderful thing to look with the stereoscopic microscope at sand from the Pacific Islands or other exotic localities, and find that it consists almost entirely of small shells of marine animals.

For collecting foraminifera, you can go to the waterline and pick up calcareous material from the surface with a spoon or plastic card and insert it in plastic bags or vials. On a beach, take several samples from different places in order to increase the probability of finding foraminifera. A little 10X lens also helps. Then label the date and localities where you have collected samples. When you arrive home, wash the sand samples to eliminate salt, and then dry them; insert into little vials for storage.

For mounting foraminifera there are some minimum materials required:

For gluing microfossils to slides, use a commercial glue made for mounting microfossils (Figure 1), or prepare glue yourself using Tragacanth gum (Figure 2). Gum Tragacanth is a suitable adhesive because it tends to leave no unsightly smear, and it is easy to prepare by mixing powdered Tragacanth with water; it also has the advantage of being removable.

For creating a brush for picking up foraminifera, I have used a needle that I have inserted into a plastic-handled screwdriver, and in the end of the needle I have glued a single strand from a toothbrush (Figures 3 and 4). 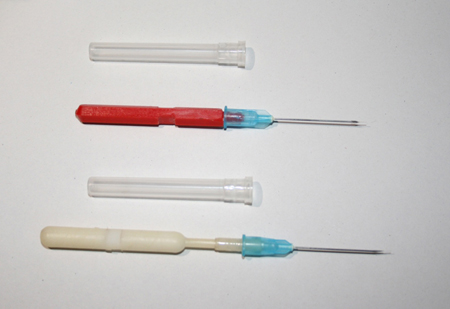 Then I prepare a little square of rigid white paper that serves to hold the mounting slide, and acts as a base to deposit samples of foraminifera to be picked up for mounting (Figure 5). 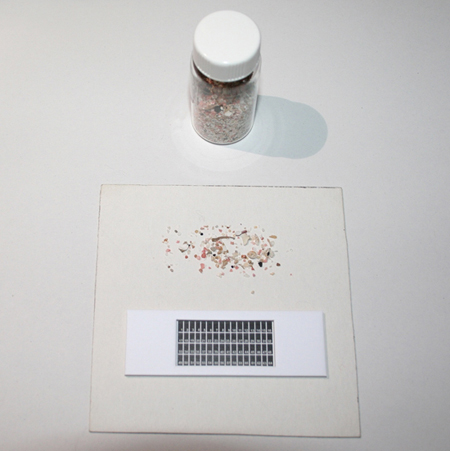 The type of slides I use are fundamentally of two types; namely, commercial microfossil slides in the form of a 64 numbered grid, or those with one or more holes, as shown in Figure 6, below. 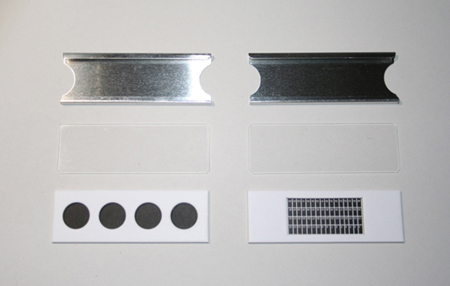 Or, I use ring slides, and glue internally a round paper with a grid created with computer software, and printed with a color laser printer (Figure 7). 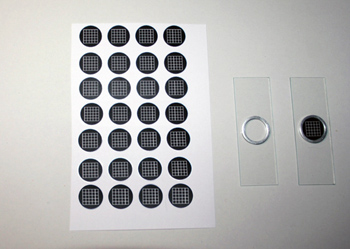 Then, after inserting the foraminifera fixed with Gum Tragacanth, the ring slides are sealed and protected with asphaltic varnish, precisely deposited
around the edge of a round coverslip of 16 mm diameter. Asphaltic is a varnish based on bitumen, and is diluted with turpentine. When the asphaltic varnish has dried, another ring of it is used to aesthetically complete the slide. Picking up foraminifera and gluing them to slides is work requiring infinite patience. Foraminifera are also of small dimension, so the hand must be very steady.

The first step is to strew a little sample of foraminifera onto the rigid paper with the slide on which they will be glued (Figure 8). 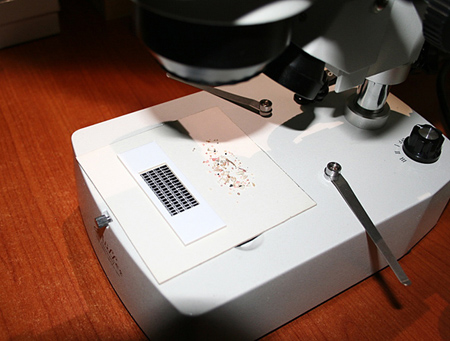 Then, with a toothpick, take a small amount of glue and spread it in the area where you wish to deposit the foraminiferan (Figure 9). 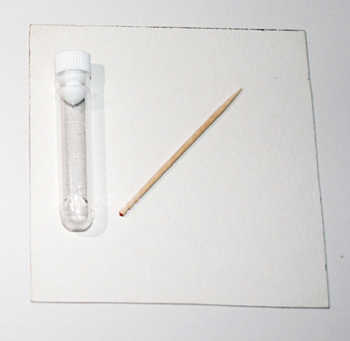 With the tip of the brush dipped in a bit of glue, you find the foraminifera using the stereomicroscope, pick it up, and deposit it in position onto the slide. Then repeat the procedure for the rest of the foraminifera mount. The glue in the area where spread dries fast, so this procedure must be done quickly. When finished mounting, you label the slide with the name of the foraminifera and any other pertinent data. The labels shown in the figures were created and
personalized with computer software, such as Microsoft PowerPoint®, and a laser printer (Figure 10). 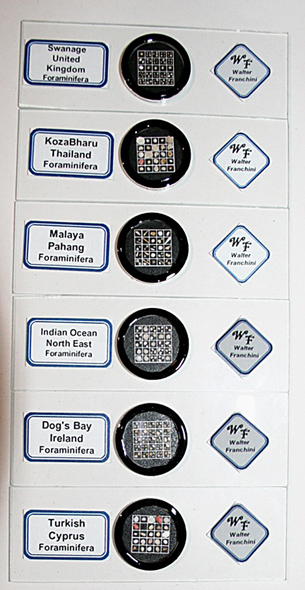 Initially, this mounting procedure will seem difficult, but with time and experience the work becomes easier. We must not get caught up in a hurry; a slide of 64 grid squares and over 250 foraminifera requires three or more hours to be done (Figure 11). At the end, however, there is a great deal of job satisfaction. 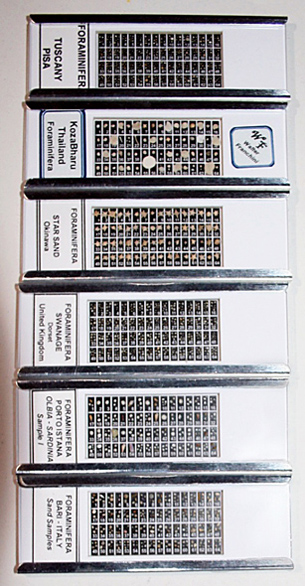 I hope that I have explained the technique of mounting foraminifera in a simple way, and I hope that people who read this article become fascinated with these wonders of the microcosm.

The final images below show a series of completed slides of foraminifera from different world localities. Click on any image to open a gallery of larger images.

Cushman, Joseph A. (1928) Foraminifera; Their Classification and Economic Use. Sharon, MA, 428 p.

Nice work. What camera / microscope have you use?

Emil, you may need to contact the author. His email address is found at the end of the article. Thank you.